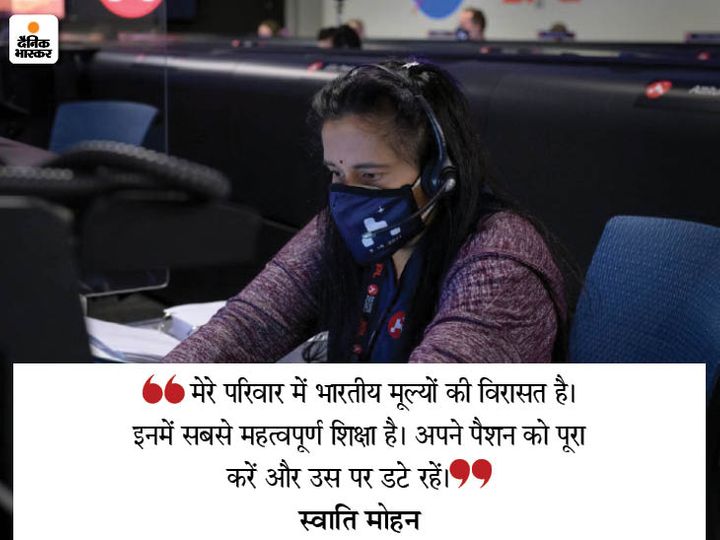 US space agency NASA’s most modern rover Percerance successfully landed on Mars on Thursday night. India is also proud of this achievement of the US, because Swati Mohan Bharatvanshi is the first to provide information about the touchdown confirmed after the successful landing of the rover. Swati is the head of Guidance, Navigation and Controls Operation at NASA, patiently announcing every step of Perception with a dot on her forehead. When Swati was a year old, her family moved to America. Read excerpts from his exclusive conversation with Bhaskar …

What was going on in the mind of the rover’s landing?
I was working so focused that I could not understand what was happening around. I was so engrossed in completing my task that it took time to stand up and celebrate.

Was there any fear of the mission failing?
Yes, we took a lot of time to make the landing of Perseverance a success. A lot of planning was done, including identifying scenes when things were not according to us. I had made sheets of all those plans. Flowchart was placed under my monitor. In it it was written that if the landing is not done properly then what we have to do and what to say. We went through all such scenes. As soon as the landing took place, I threw all those other scenes into the dustbin. (Started laughing)

Did you sleep or not the night before the landing?
I tried to sleep, but woke up again at 4:30 in the morning. Due to the preparations for the landing, we were preparing to get up at this time for the last two weeks, but we celebrated last night. I got calls from all over the world.

Raising …? Connection with India in success?
I used to live in Pennsylvania. She then moved to Washington DC. I would say that Indian upbringing has a very big role. My family has a legacy of Indian values. The most important of these is education.

What can children learn from success store?
I would say complete your passion and stick to it. Such a feat is not an achievement or experience to give you a break or make you successful. Whether success or failure depends on what you learn from it and how you take that experience. It helps a lot in your progress.