Coronavirus Vaccine Tracker Covaxin Covishield Update; How Many People Are Vaccinated In Rajasthan UP Madhya Pradesh Gujarat Including 12 States | More than 75% of Healthcare workers vaccinated in 12 states including Rajasthan, Madhya Pradesh, Gujarat 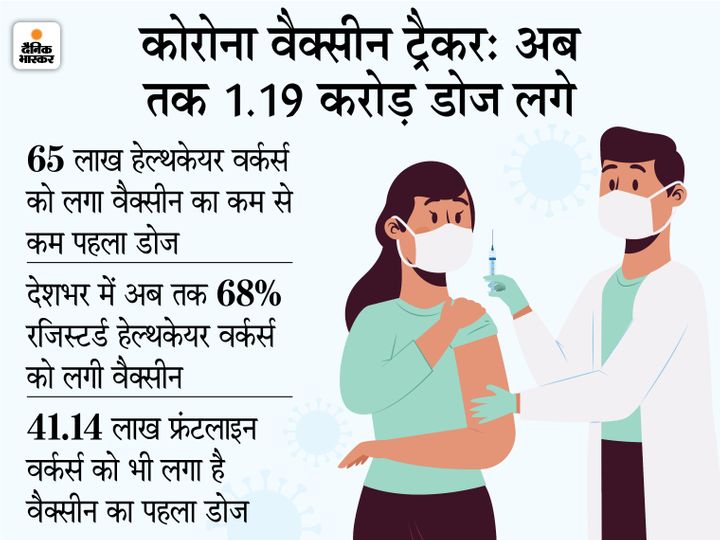 Vaccination has also gained momentum in India in view of the growing fear of a second wave of coronavirus. The good thing is that 75% of the registered healthcare workers in 12 states including Rajasthan, Madhya Pradesh, Uttar Pradesh, Gujarat have been given at least first dose of vaccine. At the same time, the first dose has been given to 68% of the registered healthcare workers across the country. In this also, on the basis of eligibility so far, 62.1% health care workers have been given second dose.

On the other hand, 41.7% of the registered frontline workers across the country i.e. around 41 lakh 14 thousand 710 have been given the first dose of vaccine. In the second phase, the vaccine dose was started to be given to the frontline workers from 2 February. Till the 39th day of vaccination i.e. at 6 pm on Tuesday, 1.61 lakh vaccines had been given. The first dose was given to 98 thousand 382, ​​while the second dose was given to 63 thousand 458 healthcare workers. 8,557 sessions were held during this period.

National Task Force member Dr. NK Arora, associated with the Kovid-19 vaccine, said that the functioning of the software is being investigated at this time. It is capable of lifting this much load and soon the speed will be increased. The biggest challenge facing the country in March will be to vaccinate those above 50 years of age. In addition, those people who are suffering from some serious disease and coronavirus can be fatal.

Vaccination gained momentum in 12 states
Health Secretary Rajesh Bhushan said that 75% of registered healthcare workers in 12 states and union territories including Rajasthan, Uttar Pradesh, Madhya Pradesh, Gujarat and Odisha have been given at least one dose of vaccine. At the same time, there are 11 states and union territories including Karnataka, Telangana, Delhi, Punjab and Chandigarh, where less than 60% of the healthcare workers have registered at least one dose as compared to the registered ones. 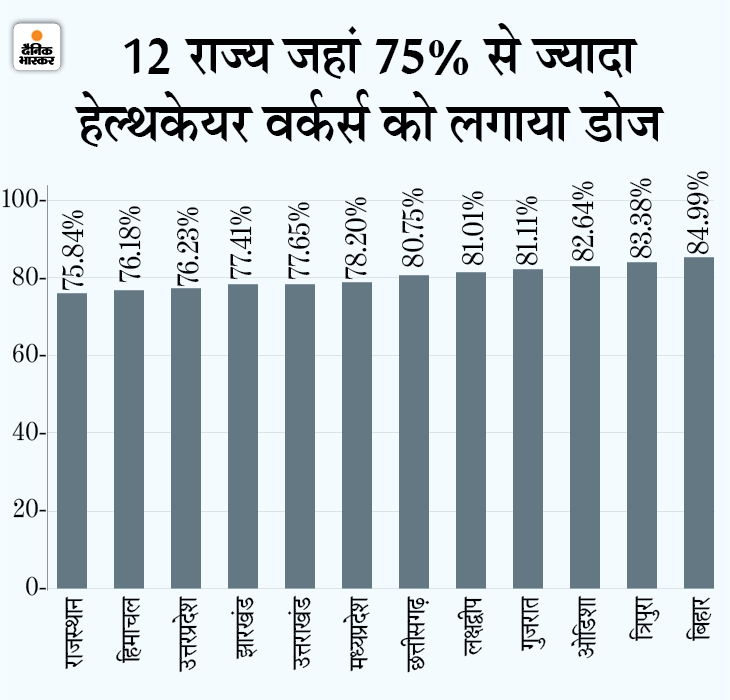 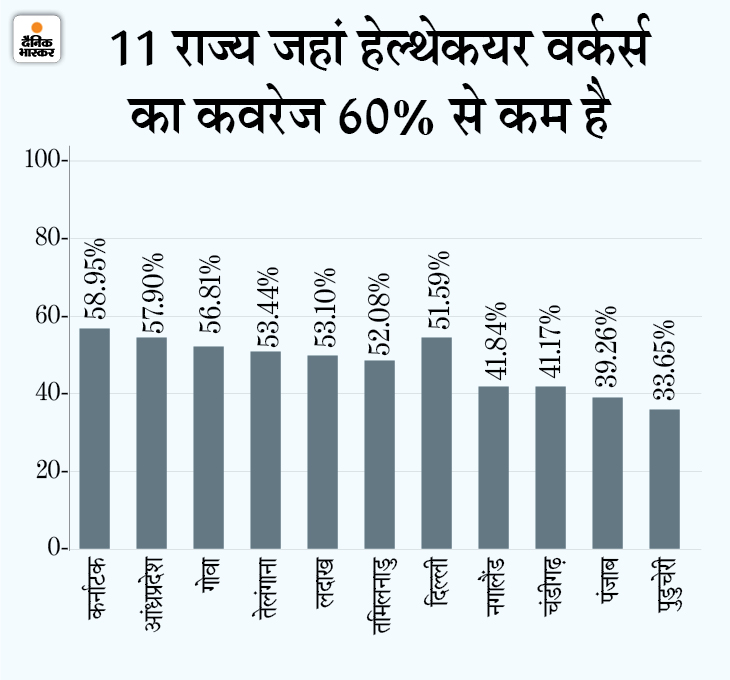 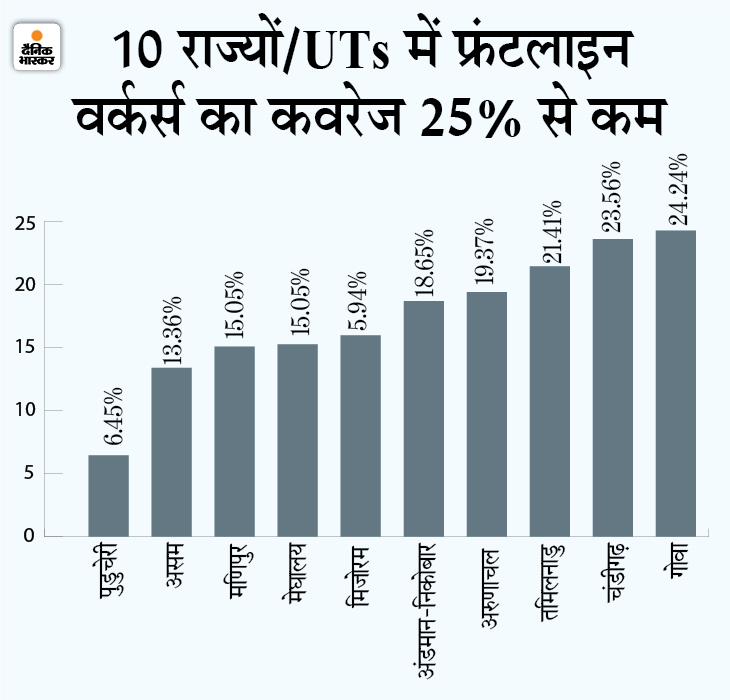 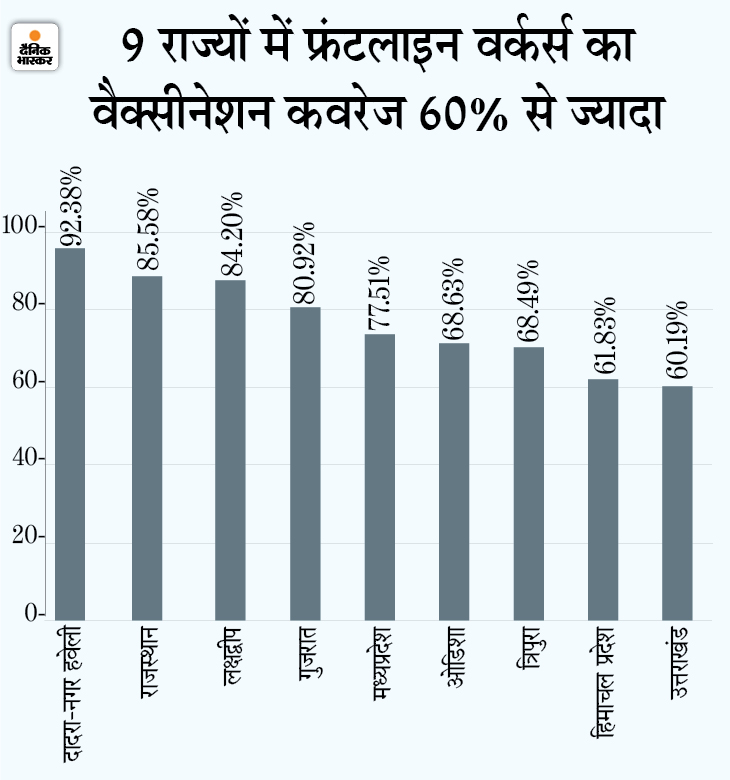 India ranked 5th in total vaccination
Many countries around the world, especially China, started vaccination in June last year and Russia in August. At the same time, the vaccine started in December in most countries including America, Britain. Vaccination began on 16 January in India. Even after this, it has caught pace. As of 22 February, 21 crore people worldwide have been vaccinated. Maximum 6.41 crore people are vaccinated in America. After this, 4.05 crore in China, 2.7 crore in European Union, 1.8 crore in UK and 1.19 crore in India have been vaccinated.