Experts reactions on sector specific on Rajasthan budget | Entry of new industries is still difficult, just 5% of the total budget for agriculture is not enough 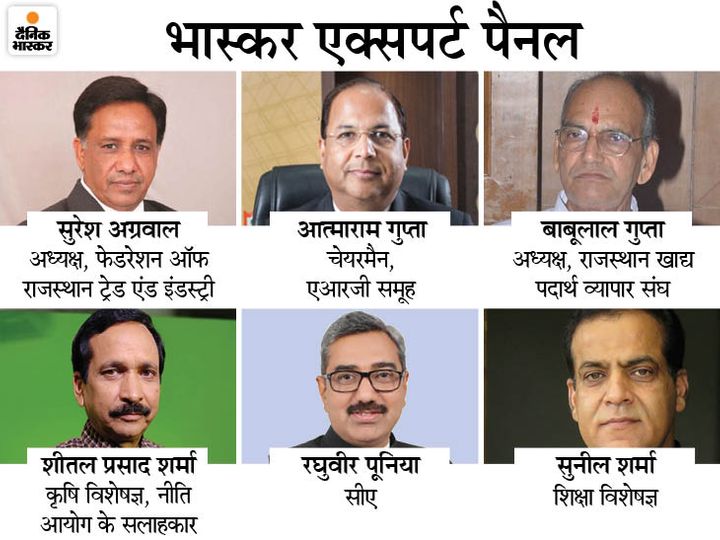 Despite the relief to industry and business in Rajasthan’s budget, some expectations were not fulfilled. The traders welcomed the reduction in mandi fee and commission rate. Experts have given mixed reactions to the third budget of CM Ashek Gehlot’s third term.

‘Better to help 5 lakh for start-up, but entry process difficult’
Suresh Aggarwal, president of the Federation of Rajasthan Trade and Industry, has spoken about the disposal of industry-related problems in the budget provisions. Provision of Rs 50 crore for MSME at the rate of interest will be relieved. It is also better to provide Rs 5 lakh for start-ups, but it is disappointing not to simplify the process of entry of new industries. Expectations of easy transportation facilities from many industrial districts of the state were also not met.

‘Savings of 1.30 lakhs on purchase of 50 lakh house’
Atmaram Gupta, chairman of the ARG group, says that a reduction of 2% in stamp duty on houses up to 50 lakhs will provide relief. If someone registers a house worth Rs 50 lakh, then he will save Rs 1.30 lakh. A 10 percent reduction in the DLC rate will also improve the situation.

‘Traders benefit by reducing mandi tax and commission’
President of Rajasthan Foodstuffs Trade Association Babulal Gupta said that the mandi tax has been reduced by 60 paise per hundred. Traders will benefit by reducing mandi tax and commission. The problems faced by traders and farmers have been resolved by the announcement of the state budget due to the Agriculture Trade and Commerce Act 2020 of the Center. Bringing amnesty scheme on VAT will remove the problems, this has the benefit of both the businessman and the government.

If agriculture is preferred in the budget, what is the use of a separate budget?
NITI Aayog advisor and agriculture expert Sheetal Prasad Sharma said that agriculture in Rajasthan was given around 5.5 percent of the total budget, while most states give 7 percent. The government also announced to bring agriculture budget separately from next year, but when the budget in your agriculture sector is less than other states, then what is the benefit of separate budget? There are many announcements about farmers in the budget, but they mostly appear to be the result of the compiled amount of central government schemes. The state has very cleverly prepared budget announcements out of the amount of central schemes. Two new agricultural colleges and 600 colleges have announced to impart agricultural education, but the call opened by the Higher Education Department last year does not yet have buildings, staff and facilities.

‘Relief to small traders by freeing goods up to one lakh from e-way bill’
CA Raghuveer Poonia said that the money stuck with the amnesty scheme would come to the government treasury. Small businesses will get relief by giving exemption of goods up to one lakh from the e-way bill. The VAT expired in 2017, but its controversies are still ongoing in the Appellate Forum. The government has announced an amnesty scheme for them in the budget. It will be like a discount sale. The amnesty scheme has so far been exempted only in interest and penalty, but this time the basic tax will also be exempt. This will lead to the recovery of the government and end the disputes. The exemption of e-way bill on goods transport was 50 thousand, which has been increased to 1 lakh. This will allow goods up to one lakh to be billed without e-way, this will give relief to small traders.