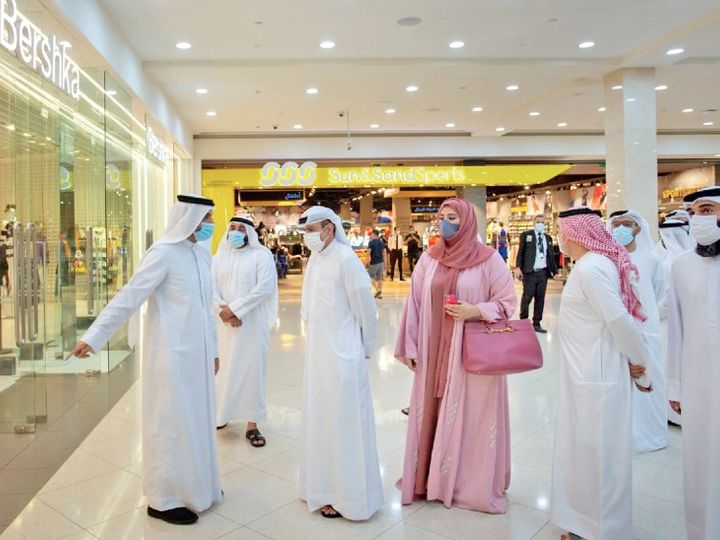 The world’s 2 biggest events, Gulf Food and Defense Expo, are going on in Dubai and Abu Dhabi and billion-dollar deals are taking place, but the return of Corona has raised concerns here. Authorities inspected the shopping mall with this.

Although the world’s 2 biggest events Gulf Food and Defense Expo are going on in Dubai and Abu Dhabi and billion dollar deals are also happening, but the return of Corona has raised concerns here. On an average, 2800 are getting infected every day. The wave of Corona is also seeing a spurt in the number of deaths. On February 19, 20 deaths have been reported from Corona.

However, in the UAE with a population of 97.7 lakh, 55.6 lakh people have been vaccinated. The government is coping with technology and strictly Corona. Video conferencing and robot work are being done in government offices. IRIS technology has been introduced on Dubai immigration. The passenger’s face is his passport.

Dubai has vigorously closed all pubs and bars. Restaurants also cannot hold events or parties. The increasing strictures can be gauged from the fact that Dubai closed 14 business establishments in January and fined 213 for not following the Kovid regulations. At the same time, 31 establishments have been fined in the last one week.

For breaking the rules, a Desert Tourist Camp, Yacht Party and Private Party have been fined Rs 10 lakh each. A travel agency offering Corona PCR test on WhatsApp has also been sealed. Capacity of cinema hall and indoor event has been reduced to 50%. Even in Abu Dhabi, the party is completely banned. Cinema halls are also closed.

Only 10 people have been allowed in the wedding and 20 people in the condolence meeting. Employees who have not been vaccinated have been ordered to submit PCR test reports every week. Experts say that in December, the Dubai Shopping Festival and New Year attracted millions of passengers. The negligence during this time has helped Corona return.

The daily average of people visiting Dubai Mall reached 2 lakh in December. If the market is making a comeback and there is recovery in all the sectors in the market, then the government does not want to lose this opportunity. After a loss of Rs 94 lakh crore in the tourism sector in 2020, Emirates Airlines achieved 75–80% growth in passenger traffic in January and February. In December, the World Coolest Winter Event has also earned a revenue of 2 thousand crores.

Passengers from Red List countries being quarantined for 14 days

Travelers coming to Abu Dhabi are going to undergo additional tests. If the traveler is coming from the country of green list, then the quarantine of 10 days, if it is from the country of red list, then 14 days will have to be in a government institution. The rest of the Emirates Sharjah, Ajman, Fujairah also have such strictness.

Coronavirus Vaccine Tracker Covaxin Covishield Update; How Many People Are Vaccinated In Rajasthan UP Madhya Pradesh Gujarat Including 12 States | More than 75% of Healthcare workers vaccinated in 12 states including Rajasthan, Madhya Pradesh, Gujarat