In Tamil Nadu, Modi did not carry out political attacks on his opponents, but in Puducherry, the Congress and its leaders were his targets. In a rally here, he said that Puducherry has suffered due to the Congress high command culture. I see that the air of Puducherry is changing.

Modi said that in 2016, Puducherry did not get a people’s government. He got a government that was busy serving the Congress high command in Delhi. Their priorities were different. Your former CM was an expert in lifting the slippers of his party’s top leader. Puducherry deserves a government whose high command is people here, not a small group of Congress leaders sitting in Delhi. 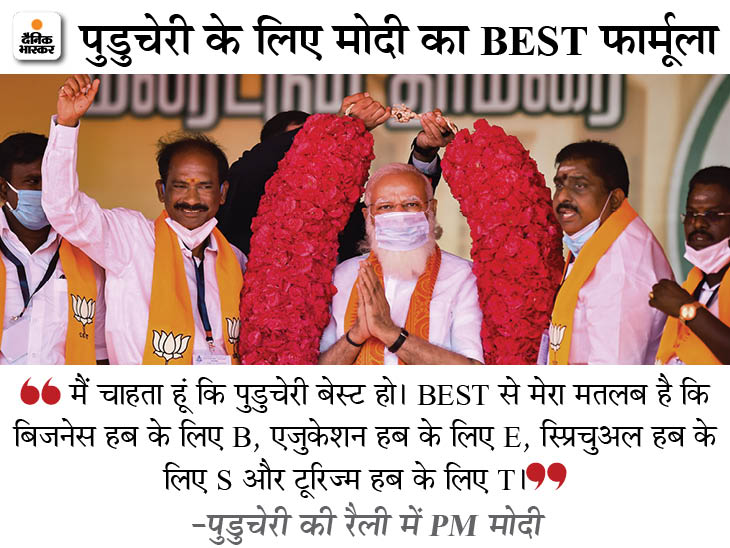 Modi said that if you ask what is my manifesto for Puducherry, then I will say that Puducherry is the best. NDA wants to make Puducherry the best. By BEST I mean B for Business Hub, E for Education Hub, S for Spiritual Hub and T for Tourism Hub.

He said that Congress leaders came here and said that we will create a separate ministry for fishermen. I was shocked The truth is that our government has already done so in 2019.

BJP’s special focus on Tamil Nadu
Modi reached Tamil Nadu after Puducherry. He has visited Tamil Nadu for the second time in 14 days. Before the assembly elections, the focus of the BJP in Tamil Nadu is to get a grip on the SC-ST and minority communities which constitute 30% of the population there. Apart from this, the BJP also wants to break the image of being a North Indian party.

BJP’s national president JP Nadda, Union Minister Rajnath Singh, Nirmala Sitharaman and Star Pracharak have done many programs here including Modi. In Tamil Nadu, the BJP is in the fray in alliance with the AIADMK, where it faces the DMK and Congress alliance.

Power project and dam project started
PM Modi laid the foundation stone for modernization of Bhavani Sagar Dam in Coimbatore. This will irrigate more than 2 lakh acres of land. This scheme will benefit the farmers of Erode, Karur, Tiruppur district. Modi said that Tamil Nadu is playing an important role in India’s industry growth. Continuous power supply is necessary for industry growth. Today the country is getting 2 big power projects. The foundation stone for another power project is being laid.

Expert 3 points on BJP’s gameplan in Tamil Nadu
1. Political analysts see the frequent visits of big leaders of BJP as a big effort. Through this, the party wants to bring the votes of the lower section of Tamil Nadu. The BJP is also trying to get the Gounders of Western Tamil Nadu, Madurai, Thevar community of South Tamil Nadu, Vaniyars of North Tamil Nadu and Nadars community in its favor.

2. The party is also sending a message to its opponents who say that the BJP is the party of North India. Another big strategy of the BJP is to show itself as pro-Tamil.

3. The second major challenge before the BJP is to deal with the battle of North vs. South or Hindi vs. Tamil. This is the reason why central leaders including Modi talk about the prosperity of the Tamil language in their programs and mention the poets here.

Second phase of vaccination: Registration will begin on Monday at 9 am on COVIN 2.0

Second phase of vaccination: Registration will begin on Monday at 9 am on COVIN 2.0