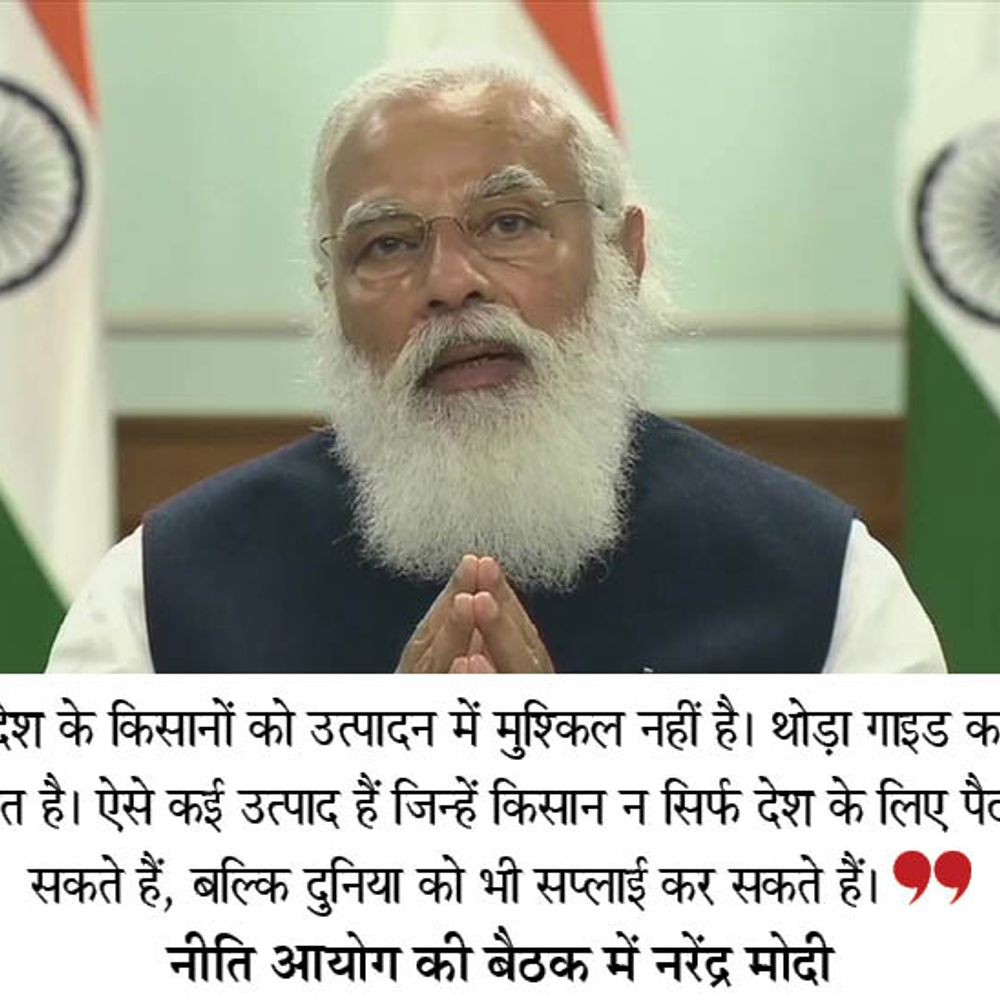 Prime Minister Narendra Modi on Saturday addressed the sixth meeting of the Governing Council of NITI Aayog through video conferencing. It was attended by the Chief Ministers of the States, Administrators of Union Territories (UTs) and Lieutenant Governors. In this meeting, Modi’s focus was on farmers.

Modi said that even though we should be called an agricultural country, today we bring about 65-70 thousand crore rupees of edible oil from outside. We can stop this. Money can go to our farmers’ account. Our farmer is entitled to these money, but for this our plans will have to be made in that way.

Our farmers can also supply the world
The Prime Minister said that we used pulses in the past, it was successful. Our expenditure in bringing pulses from outside has come down considerably. Many such food items come to our table without any reason. The farmers of our country have no difficulty in producing such things. A little guide is needed and for this, there are many agricultural products that farmers can not only produce for the country, but can also supply to the world. For this, it is necessary that all states form a strategy for their agro climatic regional planning. Accordingly, help the farmer.

Agricultural exports increased, but our potential is more
Modi said that in the last years, a holistic approach was adopted from agriculture to animal husbandry and fisheries. As a result, agricultural exports in the country have increased considerably during the Corona era, but our potential is much higher. There is a need to pay attention to storage and processing as well, so as to minimize the waste of our products.

To respect the energy of the private sector
The Prime Minister said that the positive response on this year’s budget shows the mood of the nation. The youth no longer want to lose time. Private sector development is coming further in the journey. As a government, we have to respect the energy of the private sector and give it the same opportunity in self-reliant India. Self-reliant India is a step towards an India where every person will get an opportunity to move forward with full energy. We will produce for the world, not just for ourselves. For this, we have to increase innovation, give new opportunities for education.

‘Abolished 1500 laws’
Modi also stressed on reforms. He said that recently such reforms have been done, which reduce the interference of the government. We have abolished 1500 laws. I have said that the number of Compliance should be less. I urge two things. Today we have an opportunity. There should be an effort for ease of doing business. For this, laws and systems will have to be reformed. People of the country will have to work for the Ease of Living business. The ideas that take the country forward from your side will be welcome.