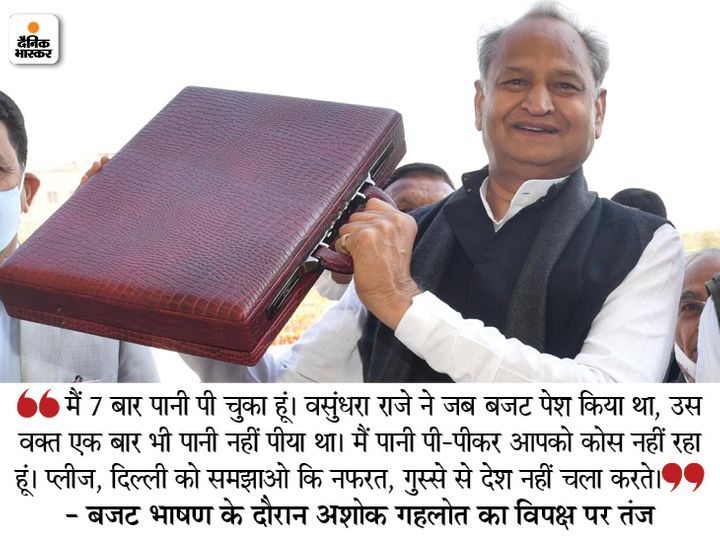 The state budget was presented in Rajasthan on Wednesday. Chief Minister Ashok Gehlot made the announcements and took jokes of opposition members. Laughing in this house continued. CM first announced 102 ambulance service for animals. Then he turned towards the opposition and said – this is a cow, at least clap. Why are you sitting with your mouth down. Face up Clap smile. Chief Minister Gehlot holds the charge of Finance Ministry in Rajasthan.

I’ve drunk water 7 times, but I’m not cursing you
During the budget, the Chief Minister again quipped while drinking water. Said, ‘I remember, Vasundhara ji once presented the budget. Then he did not drink water even once. But I have drank water 7 times till now, in fact my throat is bad since childhood. That’s why I drink water. On this, Gehlot replied on the remarks of the MLAs present in the opposition and said that I am not cursing you by drinking water. During this, there was a laughter during the budget speech in the House.

Took a pinch on Modi-Shah too
The Chief Minister took a dig at Prime Minister Narendra Modi and Home Minister Amit Shah, looking at the opposition members. Said, ‘You explain to Delhi. Explain Delhi, Explain Delhi. I want to say to all members of the opposition, please… please… please explain to Delhi. Love, love runs the country with goodwill. The country does not run with hate and anger. Disagreements also have their place in democracy. They are not traitors. They are also citizens of your country.

Is the whip released who is not clapping
After some time again, CM drank water. After this he said, ‘Hey, thank you, do everything in everything. Clap will not stop here too. Then he looked at the opposition members and asked whether a whip has been issued. Because of which you guys are not clapping. This announcement is also for you.

Opposition on petrol and diesel prices not stopped, letter written to PM Modi in Chandauli with blood

Corona in the world: 6 countries of European Union agree to abolish border ban, British PM said - Things will be normal by June