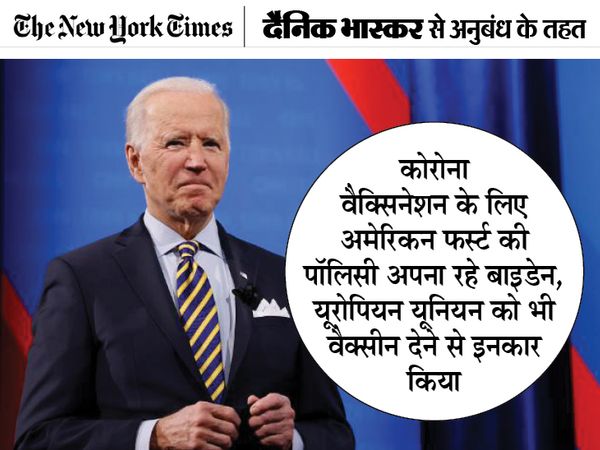 America is holding crores of doses of the AstraZeneca Corona vaccine. Due to lack of clinical test results, the US is neither using these vaccines nor is giving them to the needy countries, which have given this vaccine recognition. According to a senior Biden administration official, the AstraZeneca vaccine has become a hot topic of debate for the White House and the Federal Health Office. Some people say that the administration should send ready vaccine doses to the countries where people are eagerly waiting for it. While some are not ready for this.

US President refuses to send vaccine to European Union
An official associated with the vaccine stock says that about 30 million vaccine doses are ready in West Chester, Ohio. Emergent Bio Solutions, a Maryland company that AstraZeneca has contracted to manufacture the vaccine in the United States, has also made enough vaccines for more than 10 million doses in Baltimore. However, according to the company’s spokesperson, the AstraZeneca vaccine has been recognized in more than 70 countries, but the American clinical trial has not yet revealed the results and the company has not yet applied to the Emergency Use Authority for Food and Drug Administration. . AstraZeneca has asked the Biden administration to send the American dose of vaccine to the European Union, which the administration has refused.

The White House may decide in the next few weeks if the vaccine is sent outside the US to other countries. However, there has been no response in the case of vaccine to Brazil. Perhaps the Biden administration is concerned about the completion of the vaccine dose in the US, because the production of the vaccine is a very complicated task. Indeed, President Biden has claimed that by the end of May, there will be enough vaccine doses for every American adult.

Trump promised to give $ 1.2 billion to AstraZeneca for the vaccine
In May last year, the Trump administration promised $ 1.2 billion to AstraZeneca for the Corona vaccine and said it would supply 300 million doses if it proved effective. Negotiations between the American regulator and AstraZeneca did not materialize, and the relationship between the two soured and slowed down the vaccine’s development. The final trial could not take place for seven weeks. Because the company was not able to provide data on the vaccine trials on its two volunteers.

Vaccines will be sent to other countries only when there are enough doses for the American people.
The company is currently suffering another fear, as health authorities in Denmark, Norway and the island have suspended vaccine use due to blood clots in some people during the vaccine trial. However, European officials and the company say that there is no evidence to this effect. President Biden said in the press conference that if we have enough doses of the vaccine, then only we will send it to the whole world. But American citizens will be given priority.

Italy stopped vaccine shipment to Australia
The European Union is facing criticism for vaccine nationalism. The matter was further aggravated last week when Italy halted a vaccine shipment to Australia. On the other hand, the European Union has sent about 34 million corona virus vaccines to several countries in recent weeks, even though they themselves have suffered shortages of the vaccine.

European officials are blaming the US
Charles Michael, President of the European Council, says that the United States together with Britain has banned the export of vaccines. White House press secretary Jane Saki said AstraZeneca is completely free to supply its US-made vaccine, although they have to take into account the contract with the government. Because AstraZeneca is created with the help of the Vaccine Defense Production Act, it is imperative for Biden to be stamped on its shipment.

Johnson & Johnson’s OneShot vaccine more effective
Meanwhile, the US regulator is awaiting data on the final trial of AstraZeneca’s vaccine, in which around 32,000 US participants attended. They hope that AstraZeneca will delay providing this data as before. Federal officials believe that participants are monitored for long periods of time to learn about side effects, which is why data is delayed. Experts believe that the Johnson & Johnson vaccine would be more effective, giving just one shot.

Pfizer-BioNtech and Mordena vaccine up to 95% effective
Currently, the US vaccine is also more effective than AstraZeneca. The Johnson & Johnson vaccine is easy to distribute and is unlikely to cause any serious illness. Pfizer-BioNotech and Mordena vaccines are separately effective at up to 95%. Federal officials have also emphasized that AstraZeneca’s vaccine should not be stored indefinitely, as the vaccine has a limited shelf life. The vaccine can be stored in the refrigerator for up to six months. Some countries are giving its second dose in a two-month gap. So that the chances of the vaccine getting spoiled are increased.

US government’s full focus on Johnson & Johnson’s One Shot Vaccine
President Biden is taking steps to increase the production of the vaccine. More than 100 crore doses are expected to be ready by the end of this year. This number of vaccine doses is much higher than the need of 26 million adult people who are vaccinated. Currently, the Biden administration’s full focus is on Johnson & Johnson’s One Shot Vaccine. It is preparing to make millions of its doses in association with giant Merck Manufacturing.

Mission Mars: NASA’s Perseverance Rover sent audio, listen how the sound of the winds on Mars

Mission Mars: NASA's Perseverance Rover sent audio, listen how the sound of the winds on Mars