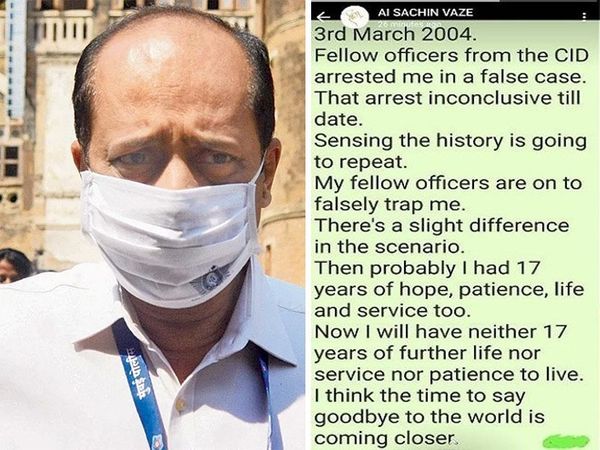 A WhatsApp status of Assistant Police Inspector Sachin Vazh surrounded by controversies is becoming viral on social media. It reads, ‘Now is the time to say goodbye to the world.’ However, this status is no longer visible on his number. It is being said that on the persuasion of the authorities, they have removed it.

He has been accused in the case of Mansukh Hiren, owner of a Scorpio car recovered from outside Antilia, the home of industrialist Mukesh Ambani. On Friday, he has been transferred from the Crime Intelligence Unit to the Citizen Facilitation Center.

It was written in viral whatsapp status
In the viral status, Vazhe wrote, ‘On 3 March 2004, my colleagues in the CID arrested me on a false charge. That case is still not cleared, but now history is repeating itself. My coworkers are now laying a trap for me again. There is a slight difference between then and now. At that time I had 17 years of patience, hope, life and service, but now I have neither 17 years of life nor service. No hope of survival. It is time to say goodbye to the world. ‘

Sachin Waze was an encounter specialist
Sachin Vazh was the first encounter specialist and his work has also been praised by Shiv Sena founder Bal Thackeray. 49-year-old Sachin Vaze has a 30-year career in the police department. Out of this, he has been out of the police department for 12 years. He returned to the police force in June 2020 only after the Shiv Sena came to power. Since then, he has been handed many big cases, whether it is Arnab Goswami’s TRP scam or Bollywood’s casting couch racket.

Left the police job and joined the Shiv Sena
Despite several attempts during suspension, he resigned on November 30, 2007, if he did not get a re-entry in the Mumbai Police. He then joined the Shiv Sena in 2008. On the government’s direction, the then Mumbai Police Commissioner Parambir Singh withdrew the suspension of all policemen in the Khwaja death case. In this way, after 12 years of Shiv Sena politics, Sachin Vazh returned to the police force again.

Entry in police department after Uddhav government formed
On June 7, 2020, a review committee decided to put Vaz back in the police department. This review committee is headed by Parambir Singh. Usually, such a committee decides to hold back any policeman. By the way, they are not the first officers who have been held back. Earlier, when Parambir Singh was the Commissioner of Thane Police, he also kept Pradeep Sharma back in the Anti Extortion Cell in September 2017. Pradeep Sharma was also suspended from the police department in the case of fake encounters.

Sachin Vaz hails from Kolhapur, Maharashtra
Sachin Vazhe was born in 1972 in Kolhapur, a rural area in Maharashtra. He is not in a very big official position. If we look at the rankings, after clearing the civil services of the state, the first posting was on the rank of Sub Inspector. He is currently on the post of Assistant Police Inspector.

Handled big disputed cases
Vazhe’s first posting took place at the Nayagaon police headquarters and he was sent to the Crime Intelligence Branch within a few days. He had many high profile cases when he came here. He also had the arrest of Arnab Goswami in the TRP case, Anvay Naik’s suicide, Dilip Chhabria’s case in the sports car scam and the casting couch racket of the Bollywood-TV industry.

This is the charge on Sachin Vaz
Former Maharashtra Chief Minister Devendra Fadnavis, in the Assembly, quoted Mansukh’s wife, accused Sachin Waze of murder. Now Maharashtra ATS and NIA are investigating this entire case. Prior to the Antilia case, few people had heard the name of Sachin Vazh outside Mumbai and Maharashtra.

Apollo11 ​​Mission: Quarantine was the first passenger to return to Earth from the moon, know how was the condition