Bengal Election Update; Amit Shah to issue manifesto of party in Kolkata, BJP sought suggestions by running target Sonar Bangla campaign in entire state | 75 lakh farmers for 18-18 thousand rupees, free education for girls; Citizenship to Refugees and the promise of the Tagore Prize on the lines of the Nobel 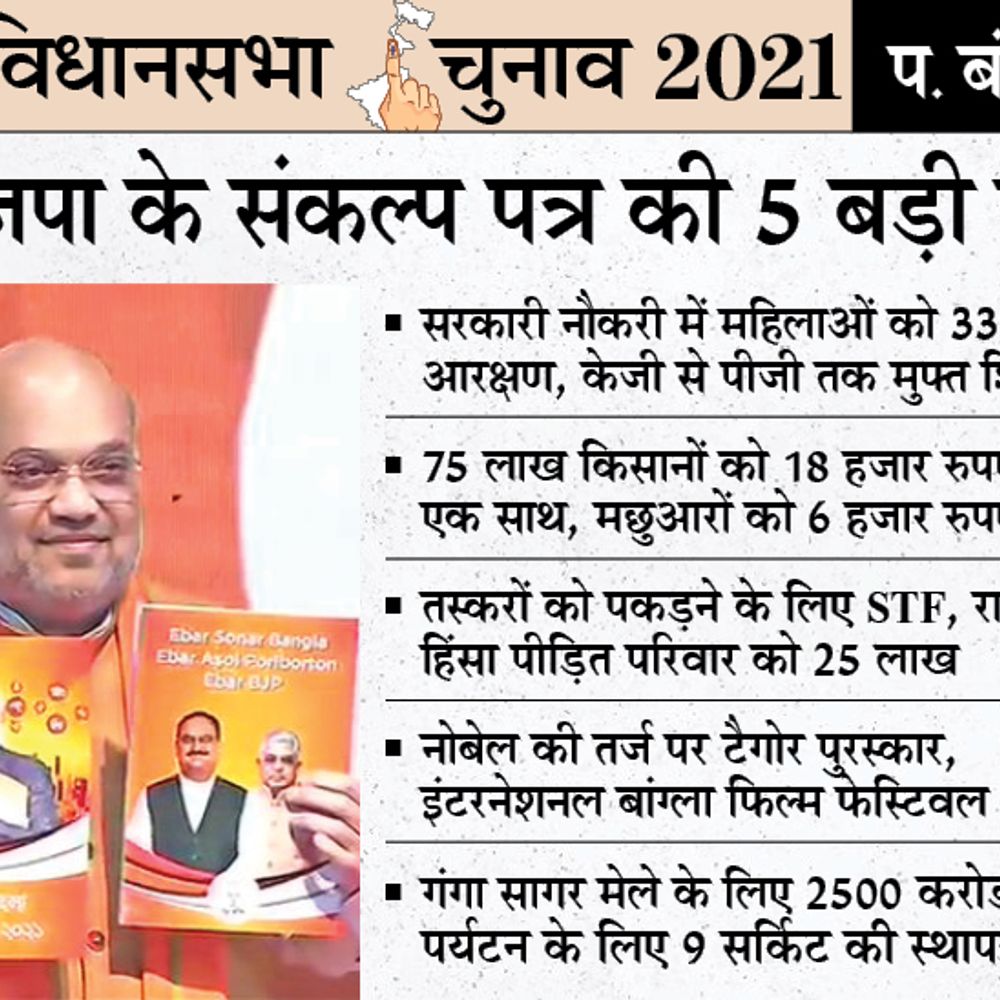 The BJP has released its manifesto for the assembly elections in Bengal. The party has called it Sonar Bangla Sankalp Patra. 33% reservation for women in government jobs, 6 thousand rupees to fishermen every year, free education of girls from KG to PG and 3 new AIIMS in North Bengal, Junglemahal and Sunderbans have been said. There has also been a promise of employment to at least one member in every family. In the manifesto, it has also been announced to give the Tagore Prize on the lines of the Nobel Prize.

While issuing the manifesto at the Eastern Zonal Cultural Center (EZCC) in Kolkata, Shah said, ‘Every religion festival should be celebrated across the country unabated. Court will not be required for Saraswati and Durga Puja. Refugees who have settled here for 70 years will be given citizenship by implementing Citizenship Amendment Act (CAA) in the very first cabinet meeting. Under the Chief Minister’s Refugee Scheme, every refugee family will be given Rs 10,000 annually from DBT for 5 years.

Under the PM Kisan Samman Nidhi scheme, 75 lakh farmers of Bengal have not received 18 thousand rupees in 3 years, they will be sent directly to the account simultaneously. After this, in addition to the 6 thousand of the central government every year, 4 thousand i.e. a total of 10 thousand rupees will be given by the state government.

For youth and education

For the health sector

For business and investment

To the capital Kolkata

For language, religion and culture

Shah appealed to give BJP a chance
Shah said, ‘You have given up to 67 years since Congress independence, more than 25 years to the Communists and more than 10 years to Mamata didi. All these parties have done the work of bringing Bengal down from its independence status. Give 5 years to Narendra Modi once. We promise to manufacture Sonar Bangla. We promise to make Bengal’s culture proud again. Bless us, you have come with a big dream. Do not be afraid of goons, they will not spoil anything. ‘

Shah said- Bengal led the country
‘The foundation of today’s progressive India was laid in tomorrow’s Bengal. This is where Vande Mataram was found, this is where Jana Gana Mana got. This is where the armed revolution started. Great persons like Swami Vivekananda paved the way to consciousness. When the country was cluttered in Kuriti, the sons of Bengal initiated social reforms. Bengal also led the freedom struggle.

Left and Mamta responsible for lagging behind Bengal
‘Great heroes like Subhash Chandra Bose, Khudiram Bose shaped the freedom movement. But today, after 73 years, Bengal has lagged behind. The reason for this is 30 years of administration. The reason for this is the rule of Left and Mamta ji. It has become the most vulnerable state for women. The youth are disappointed on Vivekananda’s land. TMC misrule has started a black chapter. ‘

Mamta criminalized politics
The traditional festivals of Bengal were also seen from the point of view of vote politics. Mamta ji politicized the entire administration, criminalized politics. Court has to be requested to celebrate the festival. Political violence has reached its zenith. More than 130 party workers have been killed. Since 1967, there have been governments which fought the central government. There is no superstition in our federal structure. India’s development is its concept.

All eyes were on BJP’s manifesto
The way BJP and TMC are pushing for their victory in Bengal elections in Bengal, everyone’s eyes were on the BJP’s manifesto. It was already known that the BJP can give its strategy to remove Bengal from the problems related to employment, corruption. Earlier on 17 March, Chief Minister Mamata Banerjee released the manifesto of TMC. Mamata has made several promises in the 146-page document. In this, he has announced to implement the scheme for jobs, health, education, farmers and the poor.

Declaration made of public opinion
The BJP had launched the Lakshya Sonar Bangla campaign in the state before releasing the manifesto. People were asked for opinion on the change in the state. The campaign was started by National President JP Nadda himself. During this time, the BJP had arranged 294 LED chariots to deliver one LED chariot in each assembly constituency. People were asked to put suggestions in a box present in it. Based on these, the BJP has issued this manifesto.

Nadda will issue manifesto for Assam
BJP national president JP Nadda will release the party’s manifesto for the Assam assembly elections on March 23. Voting is to be done in 3 phases for 126 seats in the state. The first phase of voting will take place on 27 March. The results of the election will come on 2 May.

Actress Sonam Kapoor lives in a very luxurious house with her husband, see INSIDE PHOTOS