Bihar News; 42 Doctors died in Corona Period only one family got 54 Lakh compensation promised by PM Modi and CM Nitish | 42 doctors lost their lives; Of these, 41 neither received 50 lakhs for PM’s announcement, nor CM’s said 4 lakhs. 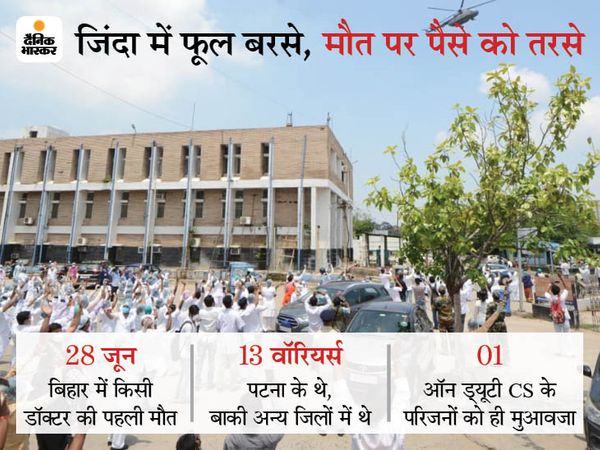 Corona Warriors! In whose name the flowers were showered by helicopter. Those who were sweaty in PPE kits in the scorching heat continued to serve Corona positive patients. When those who died while serving others, their loved ones did not have any luck. In Bihar, the family of such doctors has been vilified by the central and state government.

42 doctors died while treating Corona patients in the state, but only one of them has received this compensation. The Modi government at the Center had announced to give Rs 50-50 lakh to their families and Rs 4-4 lakh by the Nitish government in the state.

Does not care for life, fight Corona every day
Dr. Avinash Kumar died on June 28 last year in the state. He was the first doctor in Bihar to lose his life from Corona. He was a resident of Karanpura village in Vaishali and was infected during treatment at Dalsinghsarai in Samastipur. His family has not yet received the money for government help. Dr. Ashwani Nandkuliar, the second doctor of Bihar died on 13 July in Patna AIIMS. He was a resident of Ramanandpur in Gaya.

ENT professor of PMCH was killed
Dr. NK Singh, Professor of ENT Department of Patna Medical College, died in Patna AIIMS on 14 July. But the family has not yet received a government claim. Dr Kalyan Kumar, a resident of Bhattacharya Road, lost his life in Patna AIIMS on 20 July. His family is also waiting for help.

Family of doctor of Samastipur got government help
Dr. Rati Raman Jha was a civil surgeon of Samastipur. He was infected while on duty and died on 27 July 2020 in Patna AIIMS while undergoing treatment. The family says that the claim of 50 lakh claims made by the central government was also received and the state government received an ex-gratia amount of 4 lakh.

Family members say that within about one and a half months this money had come into the bank account. During a conversation with Dainik Bhaskar, the family said that they did not have to wander anywhere for this.

IMA tired of demanding, Corona Warriors not justice even after death
During the investigation, when Dainik Bhaskar spoke to Dr. Sunil Kumar, Secretary of the Indian Medical Association (IMA), Bihar, he said he was tired of demanding. Several demands were made from the government and several letters were also given to the Principal Secretary of the Health Department, but no attention was paid. He says that the IMA had demanded from the Principal Secretary about the amount of government help that the general public gets 4 lakhs, this amount should be increased to 20 lakhs for the doctors. But far from increasing, the families of the doctors did not get even 4 lakhs.