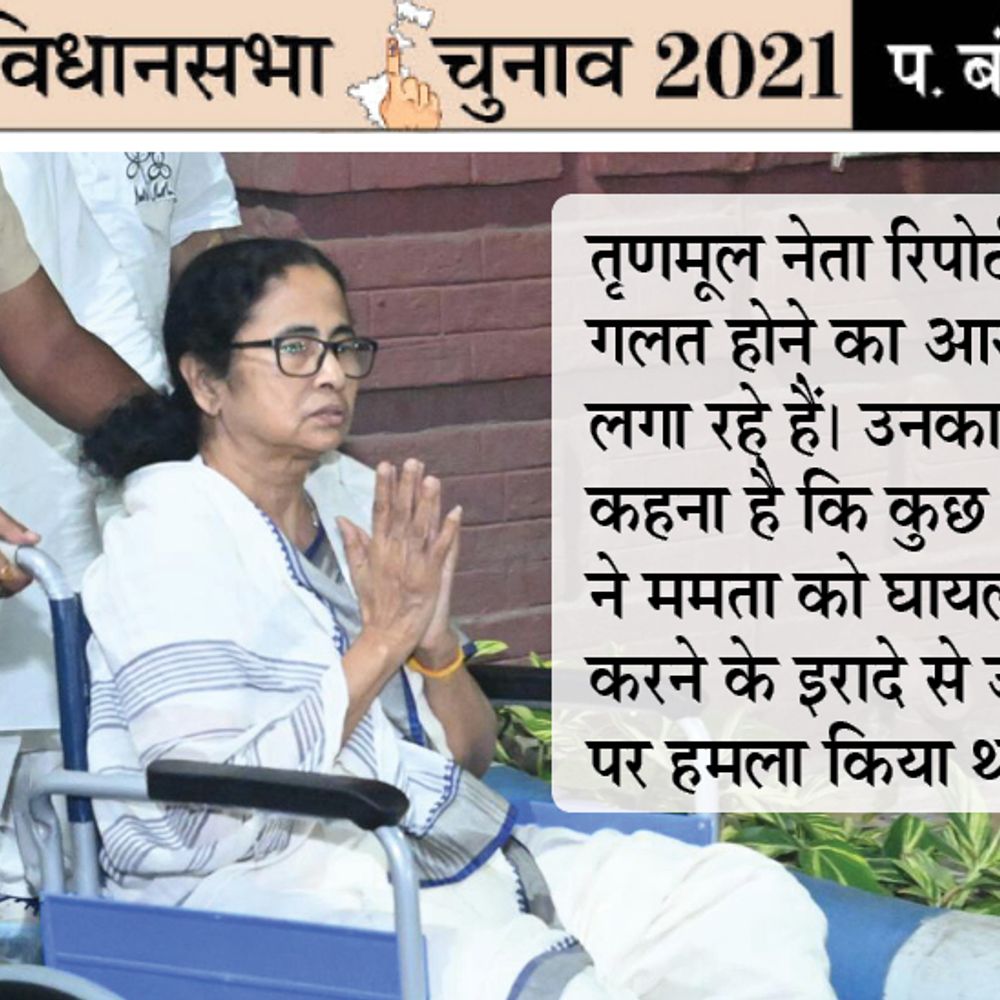 Two reports have come in the last 12 hours regarding the alleged attack on Nandigram on West Bengal Chief Minister and TMC chief Mamata Banerjee. The first report was given by the Chief Secretary of Bengal in the morning, in which the cause of the injury to Mamta was told by the door of the car.

According to media reports, late evening Special Observers Vivek Dubey and Ajay Nayak have also submitted their investigation reports to the Election Commission (EC). It states that the incident with Mamata Banerjee in Nandigram was an accident. No evidence of any attack on his convoy was found. There was adequate security on that day with Mamta.

Earlier, expressing displeasure over the report of West Bengal Chief Secretary Alapan Bandopadhyay on the attack on Mamata Banerjee, the Election Commission has asked her to give a detailed report. The report of the chief secretary said that Mamta’s leg injury was from her car door. However, he did not clarify in his report how Mamta was hurt by the car door. After this, the Election Commission again asked him to give a detailed report.

The report does not mention the attack
An official of the state CEO’s office said that there was a huge crowd at the site of the incident. The report notes that there are no clear footage of the occasion. After the incident, Mamta alleged that 4-5 people pushed her. A senior officer of the district administration said that only one shop in that area had a CCTV camera installed. He was also not working. Even the people present on the occasion could not give any specific information. It is not possible to reach any conclusion from this.

The Election Commission had asked the Chief Secretary and two Observers to submit a detailed report by Saturday evening. On the other hand, Trinamool Congress leaders are accusing the report of being wrong. He says that some people attacked him with the intention of injuring Mamta. Mamta was injured in the alleged attack in Nandigram on Wednesday.

Mamta will have a checkup again after 7 days
Mamta got leave from SSKM Hospital in Kolkata on Friday evening. She got out in a wheelchair. According to doctors, Mamta’s condition is improving. The doctors at the hospital wanted to keep him under observation for 48 hours, but he was discharged at the behest of Mamta. Doctors have given him some necessary advice and asked to get a checkup again after 7 days.

After being discharged from the hospital, Mamta’s nephew and Trinamool MP Abhishek Banerjee took her home by car. Mamta said that even after the attack and injury, she will not stop, but will campaign in a wheel chair.

TMC leader met Election Commission officials
TMC leader Saugat Roy had complained to party leaders after meeting Election Commission officials. He said that we have demanded a high-level investigation into the attack. When the incident occurred, there was no policeman present. Saugat alleged that Mamta was attacked for killing her. Some deep conspiracy is hidden behind the attack.