Corona in the world: Brazil received the highest 75 thousand patients in the last 24 hours, on March 1 this number was 38 thousand. 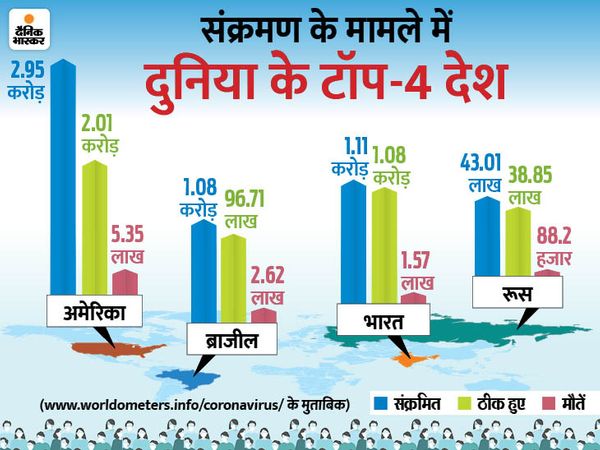 All restaurants, stores will be closed in Brazil until March 18
Corona cases have increased significantly in Brazil. In view of this, the government has started strict restrictions here. An order has been issued to close all the restaurants, bars, non-essential stores in the country till 19 March. According to local media, the spread of infection has started to increase rapidly due to new variants of Corona in the country. For the last few days, there has been an increase in the number of deaths occurring here every day.

Johnson & Johnson vaccine approved in Canada
The Health Regulatory Authority of Canada has approved the use of Johnson & Johnson’s Corona vaccine Janssen in the country. This information has been given to the news agency AP by an official associated with this case. Pfizer, Moderna and AstraZeneca vaccines are currently being used in Canada. Janssen is the fourth vaccine to be approved in Canada. The specialty of this vaccine is that only one dose is given.

Number of patients exceeds 11.66 crore
The number of corona patients in the world exceeded 1166 million. More than 9.26 million people have been cured. So far, more than 25 lakh 91 thousand people have lost their lives. Within the last 24 hours, 4 lakh 37 thousand 587 new corona infections were identified in the world and more than 9 thousand patients died during treatment. These figures are according to www.worldometers.info/coronavirus.

Panipat: Woman falls in canal due to foot slipping, laborer saved her life