Corona in the world: Pakistani minister said – third wave of corona in the country, British variant of virus responsible for it 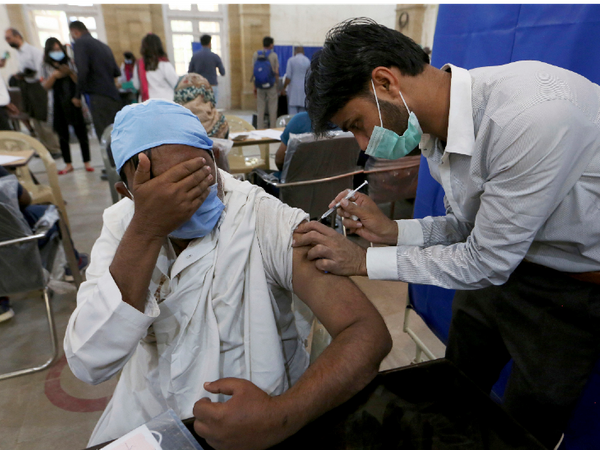 Vaccination is going on in Pakistan with the help of Chinese Vaccine Sinoform. People 60 years or older are being vaccinated here.

Pakistan’s Planning and Development Minister Asad Umar has said that a third wave of Corona has started in the country. Omar says that there is no doubt. The virus is spread by strains found in Britain. The minister said that the increase in Corona cases has been seen more in the districts where a large section of the Pakistani-British community resides.

Omar, who is heading the Center for Covid-19 Response, said that when it was confirmed in northern Pakistan, including Islamabad, we asked NIH to do genome sequencing. Later he said that genome sequencing has been done across the country and it has shown that the maximum number of cases are from UK strains. The total number of cases has crossed 6 lakh since 2,701 new cases of corona were reported in Pakistan on Friday. Of these, 5.66 lakh people have been cured. 13,377 people have died.

Britain is investigating the new Kovid variant
The UK is investigating another strain amid a spate of new cases of new variants of Corona. Xinhua reported on Thursday that so far 2 cases of the VUI-202103/01 variant have been reported in eastern England. These people had recently traveled to Antigua.

The Department of Health has stated that spike mutations E484K and N501Y are in this variant. These two are associated with the variants identified some time ago. He is named as the Variant of Concern. The department has also said that contact tracing teams have also investigated those exposed to the infected. No new cases have been found.

Pfizer Vaccine 97% Effective on Symptomatic Corona Patients
According to a study conducted in Israel, Pfizer’s vaccine has shown a 97% effect on patients with corona symptoms. The findings were based on data collected by the Israeli Ministry of Health. Based on data from the Vaccination Campaign in Israel, it is also stated that the vaccine is up to 94% effective in cases without symptoms.

Louis Weimar, chief medical officer of the US pharmaceutical company Pfizer, said the data coming from Israel is confirming the results of our third phase of clinical trials. This suggests that the vaccine is highly effective in preventing serious illness and deaths due to corona.

Analysis of new data suggests that people not taking the vaccine are 44 times more likely to become infected with the corona with the symptom. At the same time, the risk of dying from the disease is 29 times higher. Fizer concluded this based on data from the Vaccination Program in Israel between January 17 and March 6. The company has said that this study is important for those countries, who are preparing to take their vaccination program to the next stage.

BJP trying to woo voters before the civic elections, know why Congress made a big charge

BJP trying to woo voters before the civic elections, know why Congress made a big charge