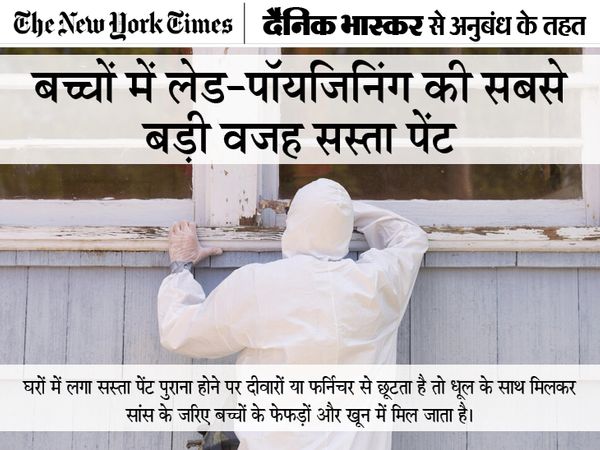 Washington. Such side effects of corona lockdown have been revealed which are very dangerous for children. In the US, the risk of lead poisoning in children has increased greatly due to lockdown in the US. The US Center for Disease Control and Prevention (CDC) estimates that the lead in blood has risen to an alarming level in the blood of about one million children due to the lack of a blood test during the corona. Lead poisoning can cause major problems in children such as lack of learning ability, behavioral problems and delayed physical development.

Dr. Joseph Courtney, Senior Epidemiologist of the Lead Poisoning and Environmental Health Tracking Branch at the CDC, says that in the thousands of children, there was no investigation of lead poisoning. This can cause permanent damage in their lives.

During the last 50 years, US health authorities have achieved great success in protecting millions of children from lead poisoning and permanent neurological damage. Since the 1970s, the percentage of children whose blood lead levels were high has decreased significantly. But in 2020, Corona put this achievement at great risk. During this time, the children remained locked in their homes and day care due to the lockdown. Where lead poisoning on them increased significantly.

Children’s blood reaches lead like this in paint
The CDC estimates that despite restrictions in 1978, more than 20 million households in the US have lead-based paint. When this paint gets out of the walls or furniture when it gets old, then it gets mixed with dust in the lungs and blood of children through breath.

Young children are most at risk
The greatest risk of lead poisoning is to young children, who have developing brains. David Jacobs, the chief scientist at the National Center for Healthy Housing, says that lead poisoning in most children is caused by dust paint on their hands or toys, because children of this age have a habit of carrying everything in their mouths. is.

Lead investigation required in many states
Because of the danger of lead poisoning, many states in the US have made it necessary to have a lead test in children of a certain age. Doctors usually perform lead poisoning tests as a routine checkup of children. But in March last year, when the epidemic knocked, everyone was ordered to stay home. Most hospitals were closed. The remaining doctors started seeing patients from virtual appointments.

Blood test decreased very fast
Stephanie Yendell, senior epidemiologist at the Minnesota Department of Public Health, says you can’t get a blood sample through a video call. The lead poisoning test was up to 70% in the month of March. It fell to 43% in April. At the same time, New York had 88% fewer investigations in April.

Lead poisoning in 2% of American children, the poorest among them
In the US, about 2% of children have an increased amount of lead in their blood. CDC Senior Epidemiologist Joseph Courtney says that more children who survived the investigation are the most at risk of corona. Because it is the children who mostly live in low income group houses. In such a situation, these children are at highest risk of lead poisoning with lead paint. They have the highest number of black children.