BJP has told its MLAs that no one will leave the house without the permission of the Leader of the House.

Haryana no-confidence motion: There are currently 88 members in the Haryana Legislative Assembly, the coalition government needs a figure of 45 for a majority.

Chandigarh The Congress is going to bring a No-Confidence Motion against the Haryana Government today. Haryana Chief Minister Manohar Lal Khattar has reacted to this no-confidence motion of the Congress. CM said that the opposition should take care of its people, this is a very big thing. We have no problem of any kind. The no confidence motion being brought against the government will definitely fall.

On the other hand, Haryana Deputy Chief Minister Dushyant Chautala said that on the basis of the majority with which the government was formed, the people of Haryana will run the trust of the next four years. The Leader of Opposition 4 years ago, the contract farming which he brought, today reflects his double-mindedness.

Let us know that voting will be held in Haryana Legislative Assembly today after discussing the no-confidence motion of the Congress. Regarding this, BJP, JJP and Congress have issued whip to their respective MLAs. In the whip, all parties have asked the MLAs to stay in the house till the proceedings are over. The Congress has brought a no-confidence motion against the coalition government of the state in protest against the new agricultural laws. BJP, JJP has requested all its MLAs to vote in favor of the government. Whip has been issued by BJP’s Chief Whip Kanwar Pal, JJP’s Chief Whip Amarjit Dhanda and Congress’s Chief Whip Bibi Batra. 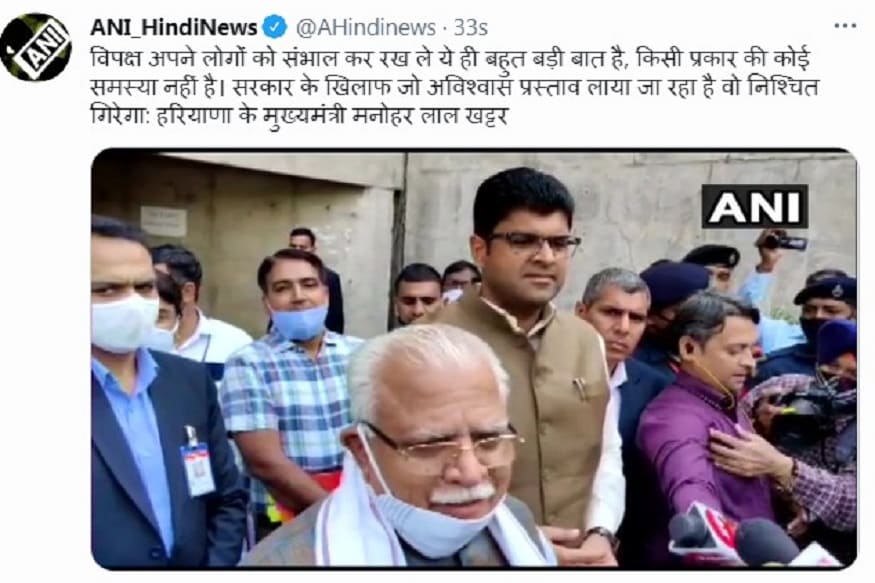 Let me tell you that the JJP and independent legislators have made it clear that they are against the agricultural laws but will not vote in favor of the motion of no confidence. The Congress is hopeful that some independents and ruling legislators can cross-vote in view of the pressure from the farmers.

There are currently 88 members in the Haryana Legislative Assembly. The resignation of Abhay Chautala has left the Ellenabad seat vacant. Kalka MLA Pradeep Chaudhary has been disqualified after being sentenced to three years in a case. Due to this, Kalka seat is also empty. In such a situation, the coalition government needs a figure of 45 for the majority. Currently, BJP has 40, JJP 10, Congress 30, Independents seven and one Halopa MLA. Two seats are vacant.

What this means for you: The supply and demand of drinking water from Bisalpur dam has deteriorated equations.

What this means for you: The supply and demand of drinking water from Bisalpur dam has deteriorated equations.