Lockdown Travelers: The couple, who were traveling around the world selling everything, were trapped for a year, now started traveling 14000 km by boat to return to Australia. 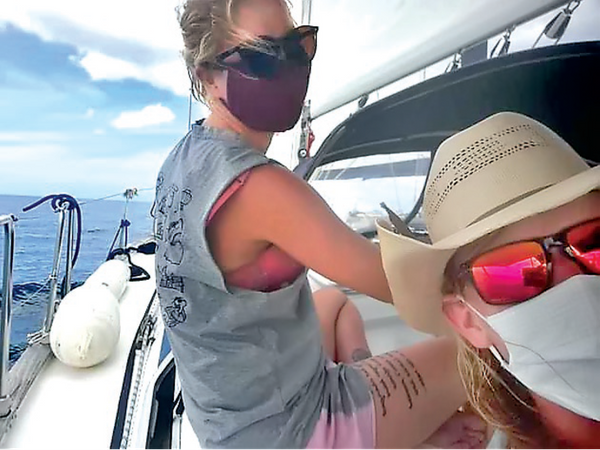 Jake-Tamara began the journey from Panama on Friday. In four months of their journey, they will face deadly fish like storms and sharks.

The story is of Jake Shepard and his wife Tamara Illyk. This Australian couple had gone on a world tour selling everything, but Corona made their way hard. The couple completed a trip to 4 continents and 8 countries in a year, going through lockdown and all restrictions.

When they have no money left, they have started a sea voyage from Panama to Australia with the help of a small boat. If all goes well, the Shepard couple will travel 14 thousand km to reach Australia in four months. Shepherd couple telling their story ….

Lockdown made our journey very exciting and adventurous

We were working 9 to 5 jobs in Brisbane. Was fed up with this routine. So we planned to roam the world. There was no money, so the house was sold. Decided to go to the country, will do small work and take out the expenses. On March 2, we arrived in Thailand and got a tour guide job on March 14. Three days passed that the lockdown took place and the job went away. The Australian border was also sealed. We were stuck here for 8 weeks.

When the lockdown was relaxed, it traveled hundreds of kilometers from southern Thailand through several cities in northern Thailand. The whole world was shaken due to Corona. So we started a Lockdown Travelers channel on YouTube to tell people about our experience. Reached Paris from Thailand on 26 September. First saw the effect of corona here. There were a few people on the plane. It usually takes 4 hours to climb up the ticket to the Eiffel Tower, but it took us 20 minutes.

As of 11 November, there had been 41 thousand deaths from Kovid in France. Our money was running out. We arrived in Amsterdam via Belgium instead of the plane. Reached Mexico after spending a few days here. Lived here doing small jobs. Arrived in Panama in January after two months of wandering. The problem created during the lockdown made our journey exciting, but now the patience of both of us is beginning to break.

So I want to go back home. Ticketed to Australia three times, but each time the flight was canceled. Thousands of dollars were trapped by this. So we have leased a small boat. With this, we have started the journey of 14,500 km. Hopefully, after traveling for four months, we will reach our land.

Is Adidas giving shoes for free on Women’s Day? Learn the truth of this viral message coming on WhatsApp

Is Adidas giving shoes for free on Women's Day? Learn the truth of this viral message coming on WhatsApp