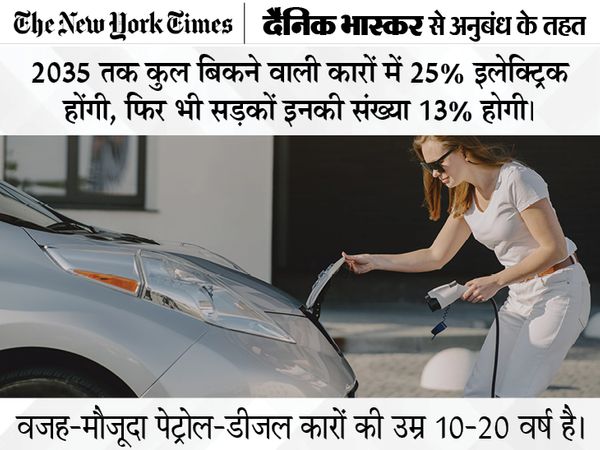 Governments and auto-makers around the world are considering electric vehicles as the main means of dealing with climate change. However, it will take many years, if not decades, to see the real effect of the emission of greenhouse gases on this technology. There is a big reason for this. Actually, the existing petrol and diesel vehicles running on the roads will last for a long time.

Analysts say that the speed of changing the entire fleet of vehicles will be very slow, because these petrol and diesel powered vehicles are more full and stronger than before. There is less wear and tear in them. According to economic forecasting firm IHS Market, light duty vehicles in the US are 12 years old on average. At the same time, in 2002, he was 9.6 years old on average. Todd Campa, an expert on automatic after market analysis at IHS Market, says engineering quality has improved over time due to competition from foreign companies.

If you stop making new petrol vehicles, it will be difficult
The US will find it extremely difficult to reduce greenhouse emissions from vehicles. One-third of the total emissions in the US are from vehicles. Some economic research suggests that if auto makers gradually stopped selling new petrol-diesel vehicles, it is likely that older vehicles are likely to last longer, as customers replace expensive electric cars with cheaper old vehicles and for longer periods of time Keep driving till
Therefore, policy makers should also consider other strategies. Policies like buyback and conversion of old vehicles into junk have already been adopted. Other policies may also include steps such as reducing car dependency by promoting public transport, cycling and walking.

Fasten companies like Uber to Electrify
Carnegie Mellon University graduate student Abdullah Alrafaz, who leads a study on barriers to reducing emissions from passenger vehicles, says policymakers should rapidly electrify ride-sharing facilities such as Uber and Lyft , As these vehicles on average run more and retire soon.
The US government may also initiate a plan to rebate the old trains to replace the new ones. The government has run the Cash for Clunkers scheme. Under this, the government spent about 21 thousand crores on replacing 7 lakh old cars with new cars.

Suggestion of higher tax on petrol and diesel
MIT Sloan School of Management economist Christopher R. Knightle says that it is more effective to tax carbon emissions by increasing the price of petrol and diesel than the policy of Cash for Clunkers. Similarly, those who buy clean vehicles and drive less should be given incentives. However, due to political impact, the prices of petrol and diesel have not been increased yet.

Follow policy like Paris and Heidelberg
American cities can also re-organize their housing and transportation, so that people are less dependent on vehicles to get around. Some cities of the world have found success in this. Since 1990, Paris has reduced its dependence on vehicles by 45% by introducing new bus and rail-lines, cycle lanes, expansion of sidewalks and banning vehicles in urban limits. The city of Heidelberg, Germany, has made reducing emissions from cars a central point of its plan.

E-vehicle adoption is also not easy, grid will have to be expanded
In a recent study by Nature Climate Change, what does a significant drop in vehicle emissions mean in America? According to the study, if the American people continue to increase driving at the current rate, then by 2050, the country will need around 350 million electric vehicles. This is a challenging figure.

To do this, not only will the country’s electronic grid require extensive expansion, but it will also require huge amounts of materials used to make batteries such as lithium and cobalt. The study found that if the American people managed to keep vehicular travel flat for the next 30 years, then only 205 million electric vehicles would be needed. This will result in drastic reduction in carbon emissions.