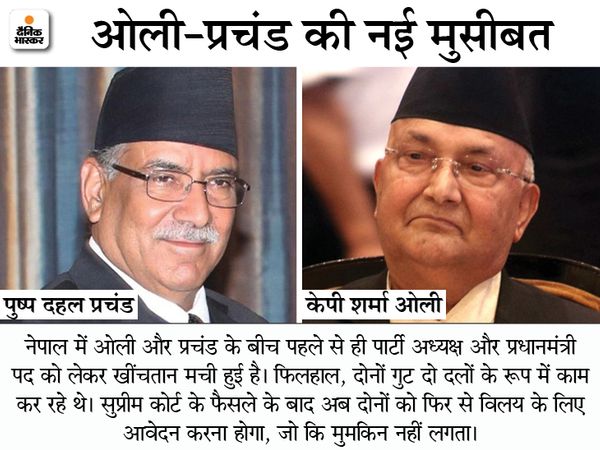 The political ups and downs in Nepal are intensifying. In the latest development, the name of the Nepal Communist Party has also been taken away from the hands of Prime Minister KP Sharma Oli and his arch-rival Pushpa Kamal Dahal Prachanda. The Supreme Court, while hearing a writ petition, has canceled the merger of Oli and Prachanda’s party in 2018. The court handed over the title of Nepali Communist Party (NCP) title to senior communist leader Rishi Katyal.

While giving the verdict on the nearly 3-year-old case on Sunday, Justice Kumar Regmi and Bom Kumar Shrestha said that when a party of this name is already registered, then how can a new party be formed with the same name. After the verdict, Katyal’s lawyer Dandapani Podel expressed happiness over his victory.

The name of Katyal’s party was also NCP
Rishi Katyal is an old communist leader. He filed a writ in the court in 2018 after the merger between Prime Minister KP Sharma Oli’s Nepal Communist Party (UML) and his arch-rival Pushpa Kamal Dahal Prachanda’s party, Nepal Communist Party (Maoist Center). In which Katyal claimed that the law does not allow the existence of two parties with the same name. Actually, Katyal had already registered in the Election Commission in the name of Nepali Congress Party.

Election commission’s decision reversed
In the 2017 Nepal election, UML won 121 seats and Maoist Center won 53 seats. The two later merged their party under an agreement between Oli and Prachanda. The new party was renamed Nepal Communist Party in 2018 after the merger. It became the largest party in Parliament with about two-thirds of the seats.

Oli is happy then disappointed
Prime Minister KP Sharma Oli has expressed happiness over the decision of the Supreme Court. Oli’s Finance Minister Bishnu Pandey said that we respect the verdict, we believe in the independence of the judiciary. At the same time, Prachanda has called the Supreme Court’s decision beyond expectations. The Prachanda-led faction also held an emergency meeting after the verdict.

The decision to dissolve the parliament was also canceled
There is already a tussle between Oli and Prachanda about the post of party president and prime minister. At the moment, the two factions were acting as two parties, although Prime Minister Oli dissolved the parliament on 20 December. The Supreme Court, while hearing the petitions filed in the case, canceled the government’s decision and reinstated Parliament. Now the merger of the two parties is over with the defeat of the title of the Nepali Communist Party. In such a situation, both will have to return to the old condition. That is, you will have to work with your old team. Or will have to apply for a merger again, which does not seem possible.

Dragon’s peace melody: Chinese Foreign Minister said – India and China are friends, not a threat to each other; Border dispute inherited

Haryana: 3 people were murdered in electoral rivalry, now life imprisonment to 8 people, the judge wrote this important thing in the judgment

Haryana: 3 people were murdered in electoral rivalry, now life imprisonment to 8 people, the judge wrote this important thing in the judgment