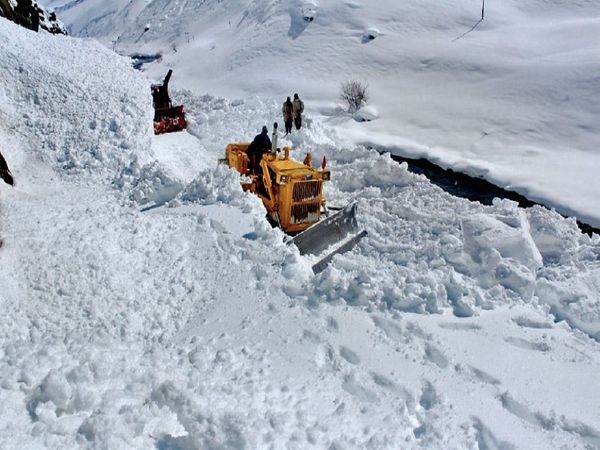 This is the first time in history that it was opened on March 6, two-three months ahead of time. BRO’s DG says that last year, more than 200 people associated with such risky projects lost their lives.

The BRO is working day and night to strategically remove snow from important highways in Kashmir and Ladakh and build new routes and bridges. In this episode, the task of removing snow from the strategically important Srinagar-Sonmarg and Gumri and Manali-Leh routes has started.

This road passes through the highest passes in the world. With this opening, the Army contingent deployed in Ladakh will get a better option of movement. The Director General of BRO said that last year the route was opened on 18 May, a month earlier than 2019.

This year we are working on the target of opening two months earlier than the previous year. All the logistic preparations have been done and all the resources for snow removal are deployed at the right place. The team completed a 20 km trek in 2 days, passing through 15 to 20 feet high icy paths in the third attempt after being caught in an icy storm twice.

This was the first time in history that the BRO kept the Ladakh lifeline, the Zojila-Kargil and Leh highway, up to 31 December last year despite challenges. Now it was also opened on 6 March, two-three months ahead of time. The DG of BRO says that you can gauge the risk of this work by the fact that over 200 people lost their lives in such a risky project last year.

Vijayak Project: 983 km long road that connects Leh and Kargil in Ladakh. In this, snow is being removed from 371 km route.

8 bridges will be ready this year in border areas

In the coming years, BRO Road, Bridge will be built on important routes like DS-DBO Road, Phobrang, Murshimi Kalan, Hotspring, Chishunmley-Damchalk Road on Indo-China border. Of these, the Sonmarg bypass bridge connecting Srinagar-Sonamarg and Gumri road will be ready soon. This year, 6 major bridges will be built on the Zojila Kargil-Leh axis.

Uma Bharti claims-liquor ban will remain in MP, said this to CM Shivraj