The brutal face of military rule exposed: Police officers who fled India from Myanmar said – We had orders, shoot the galleries till the demonstrator dies 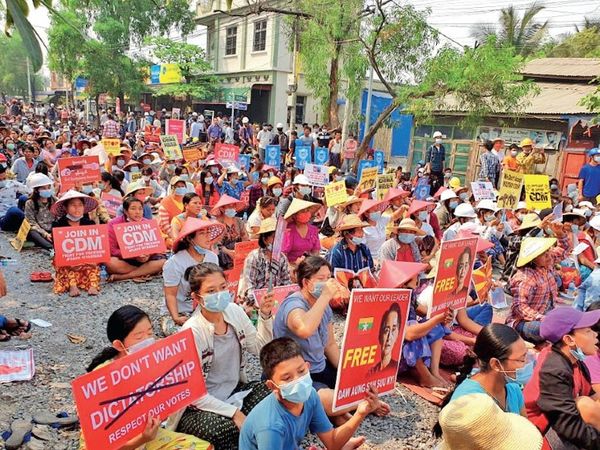 The people of Myanmar have been consistently demonstrating against the coup in February. However, the army is engaged in crushing them instead of listening to their voice. There is an order to shoot the protesters on sight. This barbaric intent to kill the military rulers has been revealed by a police officer who fled from there. According to the report of the news agency Reuters – ‘Police personnel have been told to shoot the protesters until they stop breathing.’

This story of vandalism in Myanmar began on 27 February. The army then fired indiscriminately at the protesters, killing 38 people. That day, the army personnel who were ordered to shoot at the protesters were Tha Peng. A police officer told him and his associates to continue firing at the protesters with their machine guns until they died. He did not accept this order.

He was again asked the other day whether he would do it or not, but he refused and sent the resignation. After this, he went to Mizoram in India, hiding for three consecutive days, saving his and family’s life. Here he described the painful and cruel conditions of Myanmar. The Peng police officer was stationed in the town of Khampat in Myanmar.

According to the report- Peng said, ‘I had no other way. We were ordered to shoot protesters. We did not have enough courage to shoot our own people who were performing in peace. I and six of my colleagues refused to accept the order of the seniors. Peng, however, did not name the companions.

The army is arresting and torturing the leaders. Due to this, a leader of Aung San Suu Kyi’s party has died in custody. Ba Mayo Thein, a member of the upper house of parliament, said that the leader of the ‘National League for Democracy’, Jou Myat Leen, was arrested on Tuesday. He was tortured in custody, due to which he died during treatment. Lean is the second such leader who has died in custody.