The issue of peasant farmers in the UK Parliament: India said – Discussion based on false facts, it is needless interference in the internal matter of a democratic country 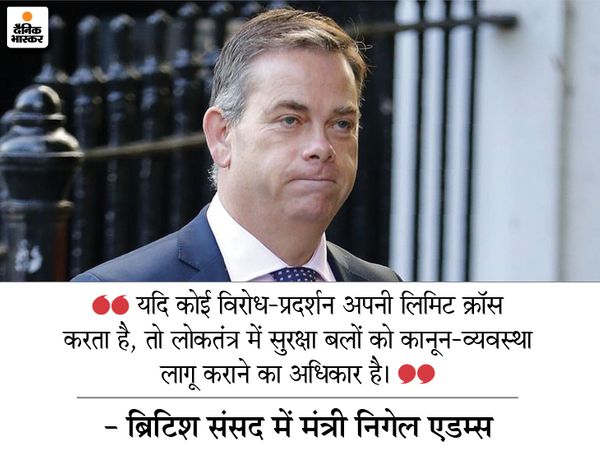 In the UK Parliament on Monday, once again the issue of the peasant movement in India was raised. The UK reiterated that the Agrarian Reform Act is a domestic matter of India and that security forces have the right to enforce law and order in a democracy. In fact, 18 British MPs took part in this discussion held at the Westminster Hall of the British Parliament, 17 of which supported the movement. The Labor Party demanded this discussion.

India has lodged strong opposition to the discussion in the foreign parliament. The High Commission of India in Britain has said that the MPs presented false facts during the discussion. We regret that during the discussion it was based on false claims and without any facts, rather than balanced debate. He said that the foreign media (including the British media) is present in India and everyone has seen the dialogue to resolve the movement. There is no question of lack of media freedom in India.

Foreign Ministry sent summons to British High Commissioner
The Indian Foreign Ministry has strongly objected to this behavior by Britain. The Foreign Secretary sent a summons to the British High Commissioner on Tuesday evening and said that it was needless interference in the internal matter of a democratic country. He said that British MPs should refrain from doing vote bank politics by misrepresenting events. Like Britain, India is also a democratic country and it should be respected.

He said that we also accept that if a protest crosses its limit, then in a democracy, the security forces have the right to enforce law and order. Adams made this statement during a debate on the issue of ‘peaceful protest in India and freedom of the press’ at Parliament Complex.

Hope to find a solution through negotiation
He said that the officials of our High Commissions Network in India are monitoring the matter and are constantly giving us feedback on the ongoing protest against agricultural laws. We know that the Government of India has also talked to the farmers several times to resolve the matter, but no solution could be found. He hoped that soon the matter would be resolved through negotiations.

Discussion in UK Parliament
The discussion took place after a petition in the UK Parliament. It appealed to the British government to put pressure on the Indian government to ensure the safety and press freedom of the agitating farmers. The petition was launched in November, which was signed by more than 1 lakh people.

Labor Party’s support to the peasant movement
Due to the Kovid protocol, some MPs took part in it from home through digital medium. Some MPs were present in Parliament. The peasant movement received the highest support from the Labor Party. 12 Labor Party MPs, including former Labor Party leader Jeremy Corbyn. Corbyn had also supported farmers earlier.

Foreign Parliament cannot be discussed: Villiers
At the same time, Theresa Villiers of the Conservative Party, while supporting the Government of India, said that agriculture is India’s own internal matter, it cannot be discussed in the foreign parliament.

Movement in India for more than 100 days
Farmers have been agitating on the border of Delhi, the capital of India, for more than 100 days. They demand that the three new agrarian reform laws be withdrawn completely. The government had talked about amending the laws, but the farmers are not ready for this.

The biggest challenge of the Corona vaccine: the safety of cargo being carried out in the James Bond style; Put the kill switch, panic button up

The biggest challenge of the Corona vaccine: the safety of cargo being carried out in the James Bond style; Put the kill switch, panic button up