The power of non-violence seen in Myanmar: Nuns defied bullets on the protesters – first shoot me, the soldiers sat on their knees with folded hands 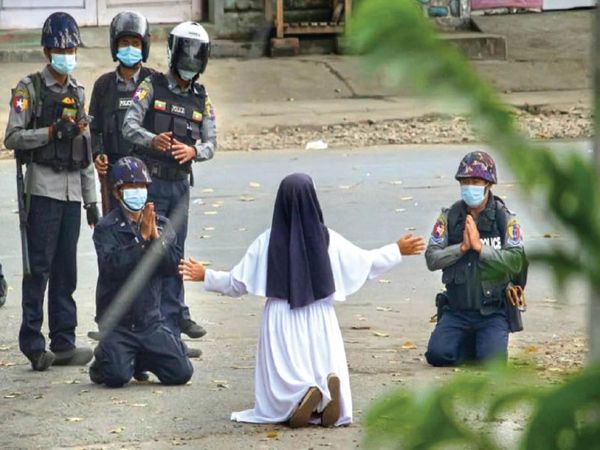 Nun sister en rose nu tawang stood as a barrier in front of the soldiers raining bullets. During this, soldiers took down guns and sat on their knees with folded hands after seeing Sister Rose’s attitude.

The soldiers are continuously firing bullets to suppress the ongoing protest against the military coup in Myanmar. So far 68 protesters have died. A powerful picture of the protest came out on Tuesday.

Nun Sister en Rose Nu Tawang stood in front of soldiers firing bullets at Myitkina, Kachin. He told the soldiers, ‘Stop firing on children, women and protesters. Shoot me first…. I will not move until you leave here or I die. ‘

Seeing Sister Rose’s attitude, the soldiers took down the guns and sat on their knees with folded hands. Later, the authorities assured the nun that there would be no more bloodshed, then Sister went away from there everyday.

People broke curfew and exited, licenses of 5 media institutions canceled
Protests also took place in Myanmar’s largest city of Yangon on Tuesday in support of 200 detained students. People violated the curfew. On coverage of these demonstrations, the military government has canceled the licenses of five media institutions in the country.

The army refused to accept the election results

Ever since the coup in Myanmar, people have been protesting against military rule. Every time the security forces are strict on the protesters. The army, which is in power, has said to deal strictly with the supporters of democracy. The country’s supreme leader Aung San Suu Kyi has been arrested. Protests have continued in Myanmar since then. Suu’s party had won a landslide victory in the November election, but the army refused to accept the results, saying it was rigged.

Myanmar’s ambassador to the United Nation (UN) Kyo Mo Tun was weeping about the incident. Tun appealed to the UN to take stern action against Myanmar’s military rule and demanded that the democratic system be restored immediately. Myanmar’s military regime has sacked its ambassador, who voiced against the military, in the UN.

Mallikarjun to replace Bahubali in Jaipur Zoo, will team up with Devasena and Avantika

Haryana no-confidence motion: Khattar government heavy in numbers, but equation may change inside, pressure on Chautala

Haryana no-confidence motion: Khattar government heavy in numbers, but equation may change inside, pressure on Chautala