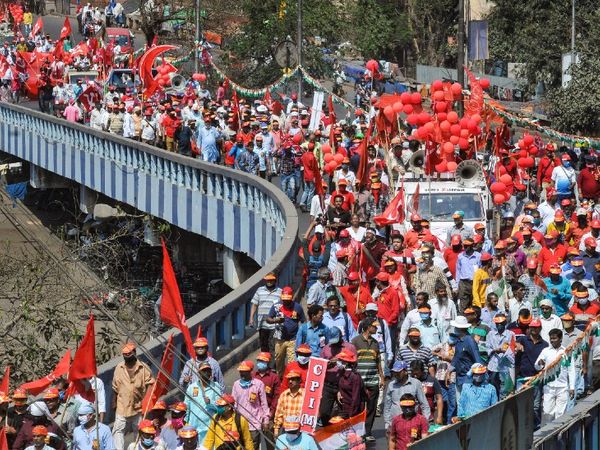 Left and Congress supporters started arriving in Kolkata from Saturday to attend the rally.

In view of the assembly elections, the Congress and the Left are holding a big rally in West Bengal on Sunday. This time both of them are going to contest the elections together. At this rally at Kolkata Brigade Parade Ground, Congress leader Adhir Ranjan Chaudhary said that this grand alliance will defeat the Trinamool Congress and BJP along with secular forces.

Chaudhary said that the large gathering here proves that there is no contest between only two parties in the elections. BJP and TMC wish there was no political power in a separate state. In the future there will be no BJP or TMC, only the grand alliance will remain.

Yechury said – BJP steeped in corruption
CPI (M) General Secretary Sitaram Yechury said that BJP has brought such laws that they are collecting lakhs and crores of rupees in the name of electoral bonds. There is no account of who is paying this money. He has opened a private fund in the name of Corona. Money is also being collected there.

They raise their voice against corruption and Modiji built a cricket stadium in Gujarat in his name. He speaks against dynasty and Amit Shah ji’s son Jai Shah is the president of the cricket association there. These people are immersed in corruption.

Third Front showing strength for the first time
This is the first time the Third Front is showing its strength before the state’s high voltage election. The Indian Secular Front is also a part of this alliance. Supporters of the Left and Congress started arriving by train and bus from Saturday night for the rally. Camps have been opened for them in Howrah and Sealdah.

The three parties have no big face
The three parties involved in the coalition do not have a big face. This is the biggest drawback of this alliance. The Left has Buddhadeb Bhattacharya, but due to ill health, he is not attending the rally. Congress leader Rahul Gandhi is on a tour of Tamil Nadu.

The Left and Congress have already finalized the seat sharing agreement. The new party ISF has been given 30 seats. Prior to the rally, senior Congress leader Pradeep Bhattacharya said that the alliance is going to give an alternative to the communal politics of the Trinamool Congress and the Bharatiya Janata Party.

Korea district incident Goddess came on minister of state Gulab Kamro | During Bhagwat Katha, the rose on the hymn started swinging down, people said – Goddess has come on these.

Korea district incident Goddess came on minister of state Gulab Kamro | During Bhagwat Katha, the rose on the hymn started swinging down, people said - Goddess has come on these.