Bhojpuri young star Pradeep Pandey Chintu’s film Prem Geet is another excellent romantic song “Satelu Jab Dehiya Mein Mahur Lagela” (Satelu Jab Dehiya Mein Mahur Lagela) has been released. The song shows a tremendous romance between Pradeep Pandey Chintu and Mahima Silwal. Also, the dance of Chintu and the shattered show of glory in the form of a foreign girl is worth seeing. She is seen wearing a pink dress short dress in a very hot style, which is increasing the mercury of the internet. It has been released on the music company Worldwide Records Bhojpuri. 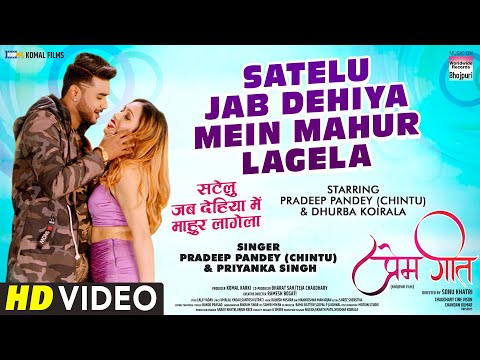 The song is sung by Pradeep Pandey Chintu and the female voice is that of popular singer Priyanka Singh (Priyanaka Singh). Its lyrics have been written by Uma Lal Yadav and composed by Rajneesh Mishra. The song is getting good response as expected. Let me tell you that the film has been directed by Sonu Khatri. The film stars Pradeep Pandey Chintu, Yamini Singh, Dhruv Koirala, Mahima Silwal, Amit Shukla, Karan Pandey, Suman Jha, Ramu Battery, Sonu Khatri and Umesh Bhatt. Let it be made under the banner of Komal Films. The producer of the film is Komal Karki. Also directed by Sonu Khatri and co-producers are Bharat Shah and Teja Chaudhary. Apart from this, Associate Producer Arjun Casey is Line Producer Golden Hills Pictures Private Limited. The story and dialogues of the movie have been written by Lal Ji Yadav and the lyricists are Uma Lal Yadav, Santosh Utpati, Yadav Raj.

PICS: Something happens that Anjali has now become very glamorous, capturing the headlines with bold pictures

‘Silence …. can you hear it?’ Film Review: You can avoid this film without making a sound

'Silence .... can you hear it?' Film Review: You can avoid this film without making a sound