‘Gulri Ke Phool’, a song by superstar Khesari Lal Yadav, has received more than 1.3 million views. Also, a large number of likes and comments are also coming on the video of the song (Video). This song is from his new film ‘Dulhan Wahi Jo Piya Man Bhaye’.

New song ‘Dulhan Wahi Jo Piya Man Bhaye’ from the Bhojpuri Industry superstar Khesari Lal Yadav’s song ‘Gulri Ke Phool’ will be released It is going viral. The song is being well liked on YouTube and that is why it has received more than 1.3 million views. Along with this, a lot of likes and comments are also coming on the video of the song. The pairing of Khesari Lal and actress Madhu Sharma is liked by the audience in the song. It has been released on the official YouTube channel of Filchi Movies. 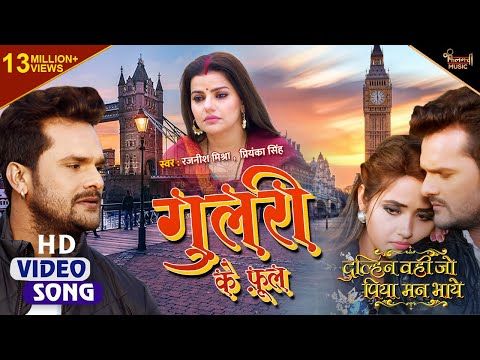 The song is sung by Rajneesh Mishra and Priyanka Singh. At the same time its lyrics have been written by Rajneesh Mishra. The music of the song is also composed by Rajneesh Mishra. Let us know that there are a lot of views on every song of Khesari Lal Yadav. Apart from this, fans and viewers also make their songs very viral. This song of his is also getting a lot of love. Let us tell you that the story of Khesari’s film Dulhan Vahi Jo Piya Man Bhaye is very emotional. The story revolves around who they love, who they are able to marry or not. The trailer of the film was also well liked. Kajal Raghavani and Madhu Sharma along with Khesari are also part of the movie. The film is directed by Rajneesh Mishra and produced by Abhay Sinha, Prashant Jammuwala and Sameer Aftab. Produced under the banner of Yashi Films Private Limited, the film’s producers are Ranjeet Singh, Ravi Arora, Madz Movies.