According to the outage tracker downdetector, Airtel is getting internet from 11:30 AM today. Many people have complained that they are facing continuous problems. DownDetector reported that the outage affected several major cities in India including Delhi, Mumbai, Bengaluru, Hyderabad, Ahmedabad, Jaipur, Kolkata and many more. 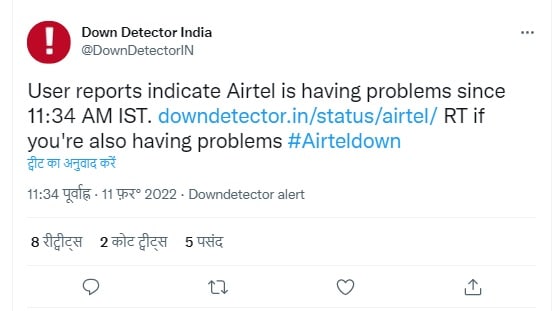 Airtel has also said that users are facing problems due to some problem in the network. The company says that this problem will be resolved soon.

Hundreds of users struggling with the problem have put forward their complaint through Twitter. Some users say that they are not even able to use the Airtel app. After the outage, people are making fun of the company through memes on Twitter.

Let us tell you that Airtel launched its video streaming platform Airtel Xstream Premium only yesterday. On the new platform, the facility to watch 15 Indian and foreign OTT in one app has been given. The price of the new pack of Airtel Xstream Premium is Rs 149 per month. By paying Rs 1499, you can enjoy entertainment on TV throughout the year.