Actually, his girlfriend Georgina Rodriguez has gifted Ronaldo a great car. The name of this car gifted to Ronaldo is Cadillac Escalade. Georgina has shared a video on social media. It is seen in the video that first Georgina congratulates Ronaldo on his 37th birthday and then shows the SUV parked outside his house, which makes Ronaldo and his children very happy.

Know what is the price?
The Cadillac Escalade is an 8 seater SUV. The price of this car is around $100,000 i.e. 75 lakh rupees. But Georgina liked this car so much that it has been imported from America to Europe specially for Ronaldo. This car is not available for sale in Europe. 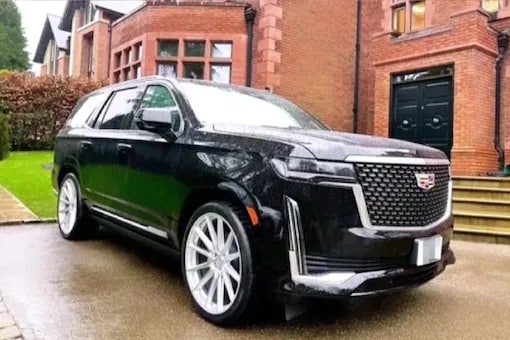 This car is equipped with many advanced features.

This car is fit for Ronaldo’s family
The length of this premium SUV is 5.5 meters. Apart from this, it is also perfectly fit according to Ronaldo’s family. Ronaldo has his girlfriend, 4 children in his family. He is going to become a father for the fifth time. In the video, his children are also seen sitting on the seats of the car. The Escalade is a feature-loaded car with a rear entertainment screen, 19-speaker studio sound system, a panoramic sunroof, heated front seats and other great features.

The car is equipped with many advanced features
Talking about the interiors, Cadillac has given the car a leather upholstery and the driver also gets to enjoy a full-TFT cockpit and touch-sensitive infotainment system. Apart from this, the SUV is also equipped with other ADAS (Advanced Driver Assistance System) features like Lane Keep Assist, Adaptive Cruise Control, Autonomous Emergency Braking and Front and Rear Pedestrian Detection.