New Delhi. Indian popular car maker Mahindra and Mahindra is soon going to introduce a range of electric cars in the country. The company has introduced three EV concept models before announcing its EV roadmap. It is believed that all three models could be electric SUVs. The company has recently shared a teaser regarding this on social media. In which three cars are shown. Which reads, “Welcome to a new world of electric vehicles.

These new Mahindra cars are being developed by a team of global designers, engineers and experts. In this regard, Mahindra has revealed its Born Electric Vision. These electric cars can be seen in the Indian market by July 2022.

In the teaser video shared on Mahindra’s social media handle, only the headlight and taillight of the concept cars are visible. Their design also gives a clear indication that Mahindra electric vehicles will look different from the current ICE model. The teaser video comes a day after the car company announced that it will be revealing its EV plans for India in the coming days. It also said that a fully electric version of its popular XUV300 SUV will be launched in the second half of next year. 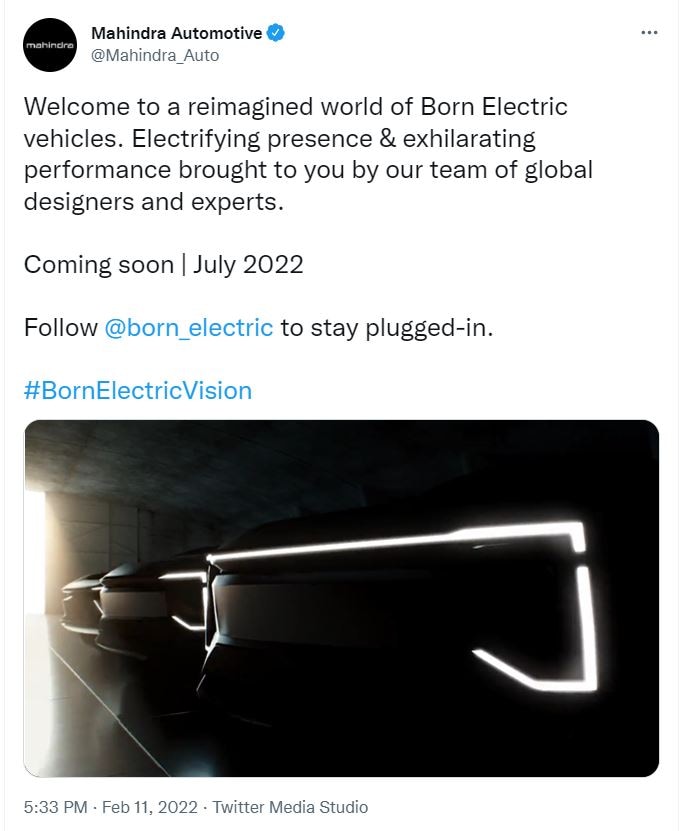 The upcoming Mahindra electric cars were showcased as part of the carmaker’s Born Electric vision. A new platform that will offer its entire EV portfolio. Pratap Bose is behind designing these concept vehicles. Who has played an important role in making the cars of the new generation Tata Motors look like. The Mahindra EV concept will be developed at the carmaker’s new Mahindra Advanced Design Europe (MADE) studio in the UK.

Also read- Rs 1 lakh only. Electric bike with 150 km range is available in this, thousands of rupees will be saved every month

Mahindra has announced that it will invest around Rs 3,000 crore to develop its electric vehicles. It also said that it will convert 4 SUVs in its ICE portfolio to electric cars in the future. The XUV300 could be one of the four, the other three shown in the teaser video could be XUV700, KUV100 and Bolero or Scorpio. However, full details about the new EV concept will be known in the coming days.