new Delhi. The country’s well-known industrialist Ratan Tata was awarded the TiECON Mumbai 2020 Life Time Achievement Award. Known for his value in the corporate world of India, NR Narayana Murthy, co-founder of Infasys, presented him with this award. At the same time, after giving the award, Narayana Murthy took blessings by touching the feet of Ratan Tata. Ratan Tata warned startup investors at the TiECON Awards ceremony in Mumbai, saying that investors who disappear by drowning money will not get a second or third chance. He said, the old-fashioned business will gradually weaken. That is why young founders of innovative companies will be the future leaders of Indian business in the new era.

Tata, who has invested in e-commerce company Snapdeal, said that ethics should be followed in business. The way of shining overnight should be avoided. He said that startups need guidance, mentorship, networking and recognition. Investors who disappear by drowning money will not get a second or third chance. 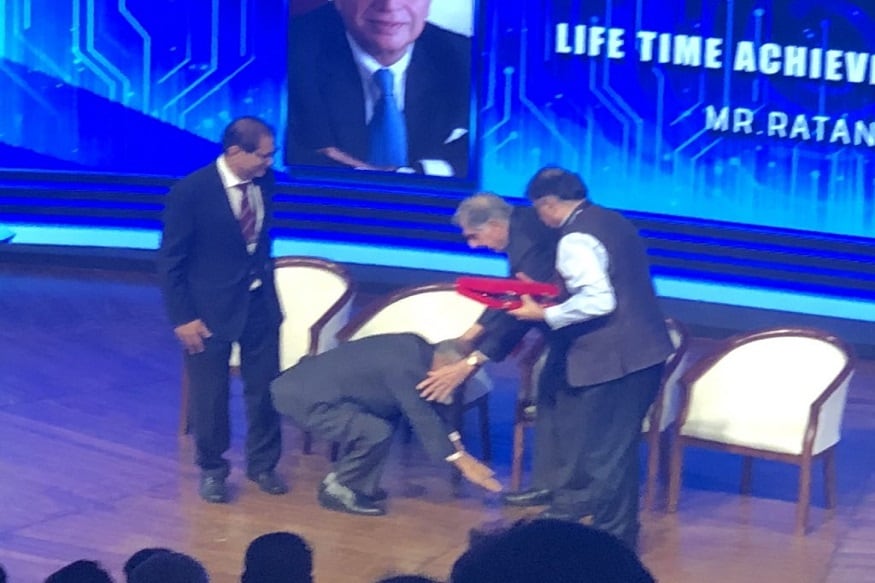 Infosys co-founder Narayana Murthy said during this time that pension funds and banks should also invest in Indian startups. A positive environment cannot be created for startups only on the basis of select investors. If maximum funds are to be raised for them, then pension funds and banks will have to come forward for investment.

There is a lot of praise on social media

After touching the feet of Narayana Murthy, people are praising it fiercely on the social media platform Twitter. One user has written that this is a very beautiful sight. The best example of business and culture has been presented. At the same time, some people have described this moment as the best picture of this year.

Who is Narayan Murthy

The full name of Narayan Murthy is Nagavar Rama Rao Narayan Murthy. He was born on 20 August 1946 in Shidlaghatta, Chikkabalapura district of Karnataka.

Narayana Murthy was born in a very simple family in South India. After finishing his schooling, he earned a degree in Electrical Engineering from the University of Mysore and did his MTech from IIT Kanpur. Narayan Murthy faced many types of financial crisis during his engineering studies. Narayanmurthy’s teaching Dr. Krishnamurthy helped a lot in these difficult situations. Later Narayanmurthy started a fellowship in his name on economic recovery.

Prior to Infosys, Narayan Murthy was the Chief Systems Programmer at IIM Ahmedabad. After this he started a company called ‘Softtronics’, but it was not successful. After that he joined Patni Computer System based in Pune.

Also read- Modi government’s focus will be on employment in the budget, may be these big announcements